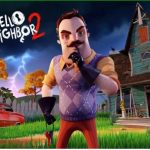 Hello Neighbor has been a surprise hit with the streaming commnity and it was a pleasant surprise to see the sequel announced.

Creepy music juxtaposed with a cartoon artstyle gives quite the dramatic effect. At any time, players could see the creepy plague mask wearing neighbor stalking them through the world. It was almost Half Life in inspiration using crowbars, laying traps, and generally running like hell to get away. Hello Neighbor 2 takes players back to the same house from the original but with new secrets to uncover.

The game will launch on Xbox One and Xbox Series X via Smart Delivery.