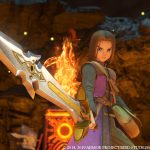 You are reading
Dragon Quest XI Announced for GamePass

Who needs to wait for the Xbox Games Showcase to reveal new games? Dragon Quest XI: Echoes of an Elusive Age is coming to Xbox. Geoff Keighley included the announcement on his pre-show for the Xbox Showcase. Yuji Horii, game designer for Dragon Quest, talked about the game in a pre-recorded video. In it, he highlighted that the game will come to the Xbox, as well as GamePass.

Dragon Quest XI will follow Hero and their band of companions’ story to save their world, Erdrea. This band will stop in various towns and cities while also fighting monsters in the wilderness. Players can fight with each characters’ unique skills such as martial arts, magic, warrior-based skills and thief-based skills.

Square Enix’s RPG originally released in 2017 in Japan for the PlayStation 4, Nintendo 3DS and Switch. It did not release outside of Japan until September 2018, but when it did, critics praised the game for its visuals, combat, plot, and characters.

Dragon Quest XI releases on Xbox services on December 4th, 2020. For more coverage on this game and more, follow us here at Lords of Gaming.