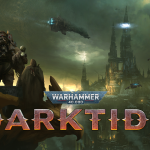 Microsoft just wrapped up its Xbox Games Showcase and it was quite a show. Microsoft wasn’t kidding around when it said that it was about to showcase a diverse line-up of games. And one of those titles was Warhammer 40,000: Darktide.

Be sure to check out the official trailer below or find the link here.

The game seems similar to Warhammer Vermintide series but in the 40,000 universes. In other words, its Vermintide but with guns and a sci-fi setting. The game features four-player coop gameplay and tackles hordes and hordes of undead. Warhammer 40,000: Darktide of course. The game will be available for Xbox Game Pass members like other titles shown off in the Xbox Games Showcase. Naturally, the game will also be optimized for Xbox Series X.

What did you think of Warhammer 40,000: Darktide? Will you try it out if you’re an Xbox Game Pass member? What else did you think the show? Sound off in the comment section below.