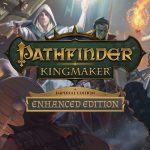 You are reading
Pathfinder Kingmaker: The RPG I Didn’t Know I Needed

Pathfinder: Kingmaker is a kickstarted RPG that was released on PC back in 2018. Two pieces of DLC shortly followed. Two years later Pathfinder: Kingmaker – Definitive Edition finally releases on consoles, with all the DLC included. I had not heard of this title before (only seeing a couple of trailers), but what I did see captured my attention very quickly.

The main reason I enjoy RPGs is the story, and Pathfinder has a nice one. 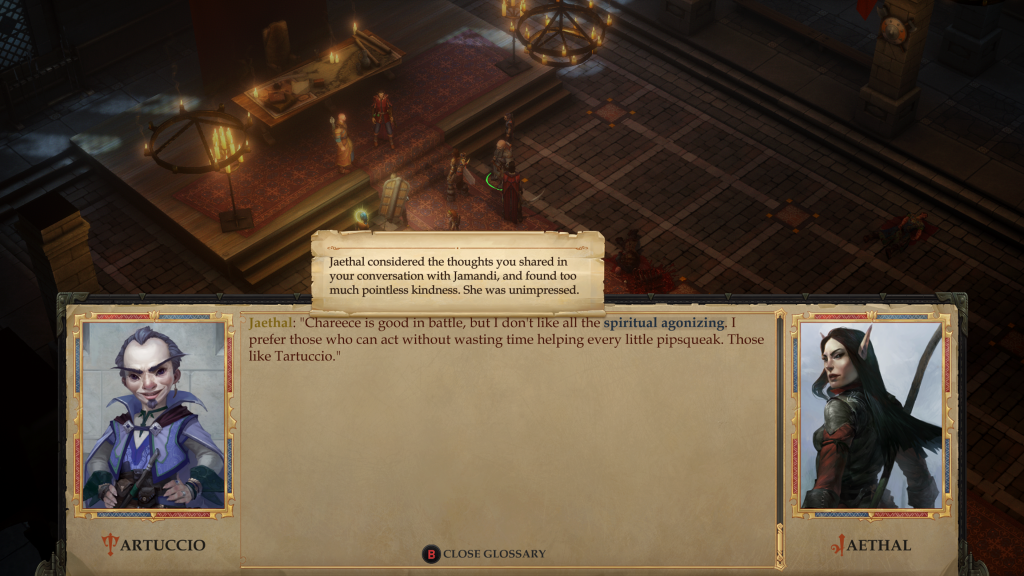 The glossary gives you background info on important people and places

After you pick your character (more on that later), you and other NPCs are gathered for an announcement. Amandi Aldori offers to make someone gathered at the meeting a baron or baroness if they can kill the Stag Lord. Aldori will give that person control of the land where they’ll be able to start their own little kingdom. This is the main story, but there’s another underlying story; one about someone or something pensioning the land.

No, your character is not voice acted, but the dialogue choices are plentiful and really do shape the game. Your actions help shape your playthrough, even little things like which specific character joins your party. For example, there is a secret room in an early part of the game. You have the option of looting this room or leaving it be. In my first playthrough, I looted everything I could find, but that action ended up hurting me in the long run. Things like this are really great for replay value. 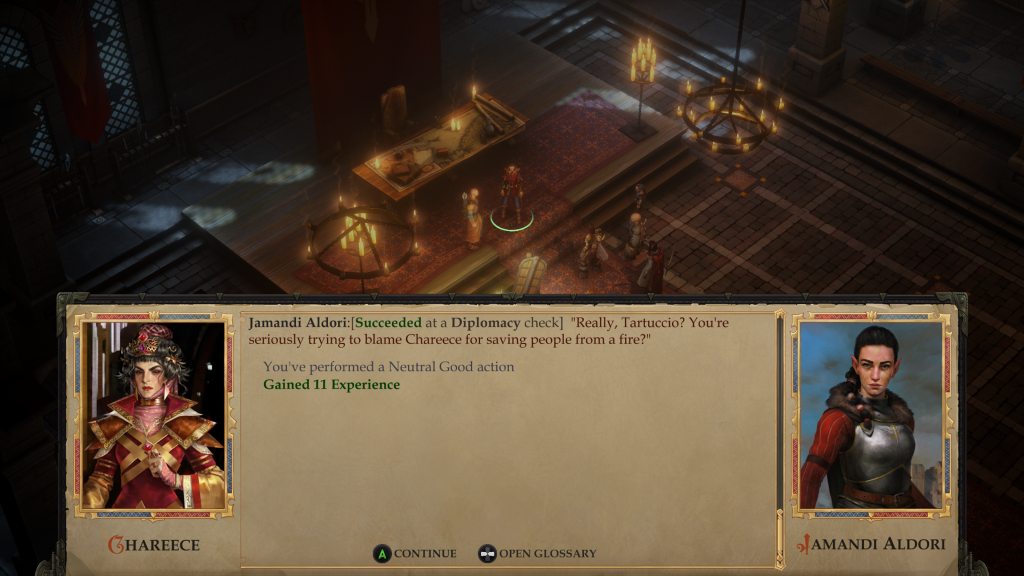 Pulling off a successful diplomacy dialogue check can give you XP.

In Pathfinder Kingmaker, your dialogue choices have weight to them and very early in the game, you can see how it affects things. In my first playthrough, I stopped to help a knight rescue some soldiers. Doing this, slightly injured my group and made the upcoming boss fight a tad bit difficult. In my second playthrough, I left those soldiers to rot and my group was better prepared for the upcoming boss fight.

Character creation is a big deal to me. A very big deal. I can spend a good hour or more making my character if I’m given the options. Pathfinder Kingmaker definitely gives you the options. There are nine different races you can pick from, each with their own racial benefits. On top of that, there are 16 different classes, more if you count the classes that have multiple archetypes.

You can pick your heritage, bloodline, and your alignment. All these things help flesh your character’s background, but some even give bonuses to your stats. My favorite thing is the alignment. Depending on what alignment you pick during this stage, affects your dialogue choices and even some skills. The first character I created was Chaotic Neutral (CN), my second Lawful Good (LG). My CN character has way more dialogue choices, some just straight evil, than my LG character. 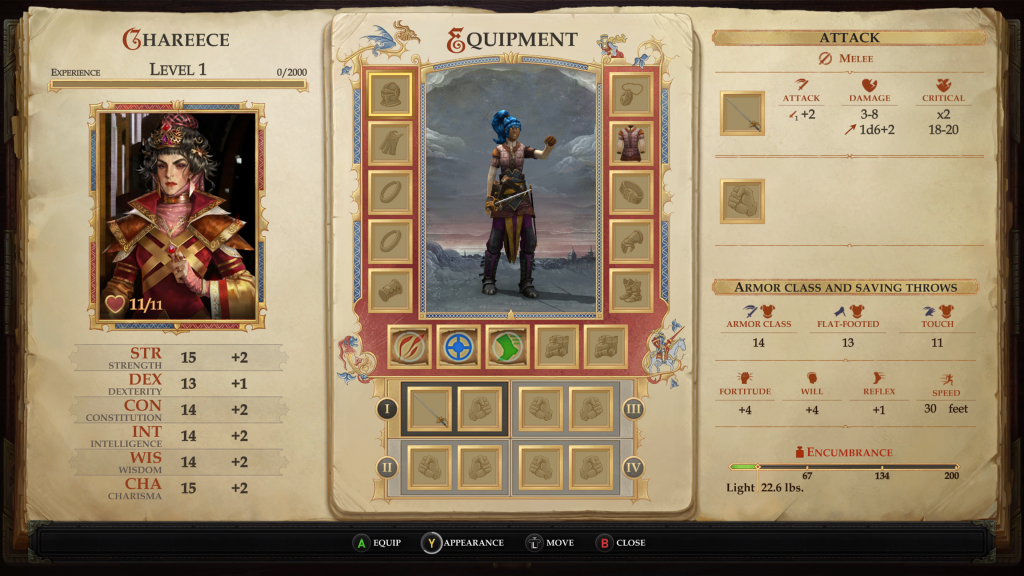 The character creation is detailed in every aspect except one: how your character looks. I understand why, you really don’t get to see your character, the camera is always overhead. But in today’s modern video game era, the options for your actual character are lacking. You can only choose from three different body shapes, a handful of different hairstyles, and let’s not talk about skin color. I was gravely upset I could not have a dark-skinned elf with purple hair. I had to settle for blue instead.

But How Does Pathfinder Kingmaker Play?

The highlight of Pathfinder: Kingmaker is its turn-based combat that was not in the original PC game. This option is a gift from the video gaming gods. There might not necessarily be a lot of things going on during combat, but there is a crapload going on behind the scenes. Yes, this does slow fights down but it also allows me to see what exactly is going on and better plan out attacks or saves. Since this game uses a version of the Dungeons & Dragons, there will be a lot of dice rolling.

I used turn-based combat so I can more easily read the description of items, skill, or even spells. It helps me get a better lay of the land, especially when you are a newbie to this series. Now, if you know what you’re doing and have a good handle on the actions of the party, then Real-Time Combat is there. I’m not ready for that yet, but I have seen clips of it and it looks awesome.

Should You Play This Game?

If you are even remotely a fan of RPGs, you should give this game a try. If you are the type of RPG player that spend hours getting lost in a fictional world, then Pathfinder: Kingmaker should be your next purchase.

Pathfinder: Kingmaker is available now on PC, PlayStation 4, and Xbox One.