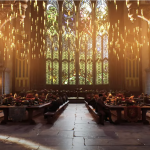 You are reading
Hogwarts Legacy Has Officially Been Revealed

There have been several rumors circulating the industry that a Harry Potter game was in the works. Rumors had originally stated that legendary WB studio Rocksteady was behind the games. We found out that was untrue with the reveal of Rocksteady’s Suicide Squad game. In a surprise reveal today, we got our first look at Hogwart’s Legacy. The brand new game is from WB Games Avalanche studio.

During the official PlayStation 5 live event earlier today, we got our first look at Hogwarts Legacy. The game is set in the 1800s and is an immersive RPG title set in the magical Harry Potter universe. The trailer heavily focuses on player choice being an integral part of the game. As you learn different types of magic and meet a variety of creatures at Hogwarts. It is heavily implied that there will be a lot more content within the game, then just at the school. Also showing a sizzle reel of various historic locations from the magical world. The trailer is everything 8-year-old me would have wanted in a Harry Potter game.

Hogwarts Legacy is set to release on PlayStation 5 and Xbox Series X sometime in 2021. We will no doubt hear more news about this game in the coming months. Now,all we can do is sit and wait for more news related to this game.

Are you excited about Hogwarts Legacy? Let us know in the comments and don’t forget to check for the latest gaming news and information.