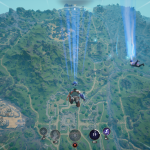 You are reading
Spellbreak: Battle Royale With A Magical Twist

Like many people, I fell in love with the battle royale genre through games like PUBG, Apex Legends, and many more. However, in 2020 it felt like the genre had been tapped out in terms of creativity. Enter Spellbreak developed by Proletariat Inc, a small team out of Boston. Formerly, the team had worked on what they described as “AAA mobile games and extensions”. Spellbreak is the developer’s first foray into the console space.

In Spellbreak, you can select your hero and pick your powers as a colorful battlemage. In your fight for survival in the “Hollow Lands”, you acquire different spells, loot, and powers you can find throughout the world. The game is truly a unique take on the battle royale genre just in its premise. 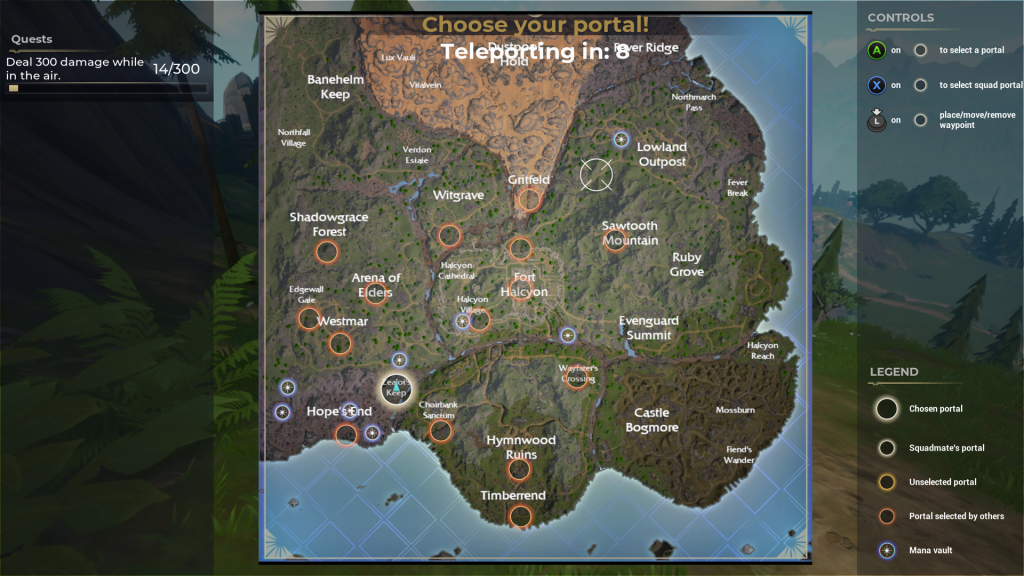 The first thing that immediately caught my eye was the art style and overall world that was presented. The art style, while cartoony, has a certain classic RPG-like charm to it. As you cast spells and explore the landscape around you, it truly feels like you are immersed in a medieval world. From small quaint villages, epic castles, and cathedrals it is probably one of the most beautiful battle royale games I have played.

My one minor complaint with the map overall however is that it is incredibly massive. Often you spend more time walking place to place then you do engaged in combat. This is a similar issue that I found with PUBG in its early days. Hopefully, with some tweaking and adjustments, Spellbreak will be able to tweak its map accordingly to better pace combat encounters.

One major complaint I have with a lot of multiplayer games is it always feels like a juggling act with weapon balancing, and often times it is downright terrible.  There is always one weapon or combo that is particularly overpowered. In Spellbreak, I worried that this might be an issue with all the different combinations you can make with the different gauntlets. But there is not one particularly clear easy-win power that breaks the game. The gauntlet is often only as good as the person operating it. I found the frost gauntlet which requires precision shots for high damage suited my playstyle incredibly well. But everyone who plays it will find a gauntlet that they find that “clicks” with them. 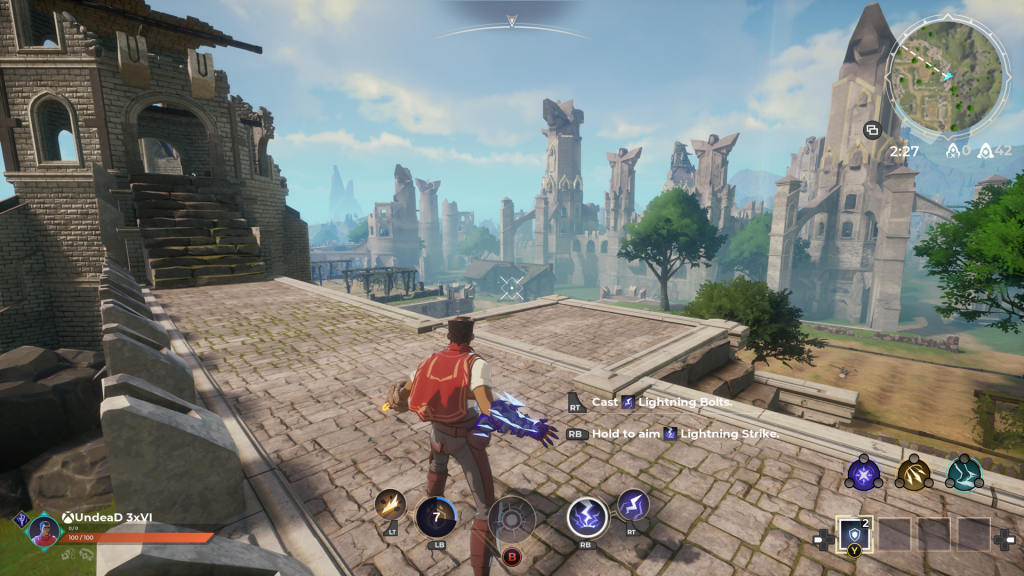 One of the coolest aspects of Spellbreak is the step away from traditional weapons within the game. Instead of hunting for the best guns or attachments. You spend your time searching for various gauntlets that are built around elemental powers, such as fire, earth, lightning, frost, and more. You get one primary gauntlet that is based on what class you choose. I chose to play the conduit, so my first gauntlet was lightning-based. Then I could track down other elements to use in my off-hand. This allows you to combo different types of magic together.

Using these gauntlets and powers was very streamlined and easy to learn. With each power, you have a basic attack and a power attack. Your main element is relegated to right trigger and bumper. While your secondary is relegated to the left trigger and bumper. This made executing combos a breeze, as you blend power moves and basic attacks almost seamlessly with little to no confusion.

One thing I loved but also disliked immensely with Spellbreak was the ability to combo abilities once you upgraded your mana enough. You could essentially wipe another player in just a little bit over a second, which is a vexing time to kill. While this felt incredibly fun to do to other players. It sometimes could be immensely frustrating when it happens to you. The one saving grace to this is that in order to pull off these combos you have to be insanely quick and precise. Even then there is a large margin for error due to most of the heavy damaging abilities being precision shots that can be easily missed. The basics of Spellbreak are quite simple to grasp; however, to master the casting and combat provides a large ceiling for growth.

The more time I spent playing Spellbreak the more I appreciated the thought and detail put into the powers and different aspects of the game. Encounters feel tense as you try to manage cooldowns on your high powered abilities. Simultaneously, you also have to be evasive and dodging your enemy’s spells and traps. I hope as the game continues its journey that they expand the various powers and combos that can be created. 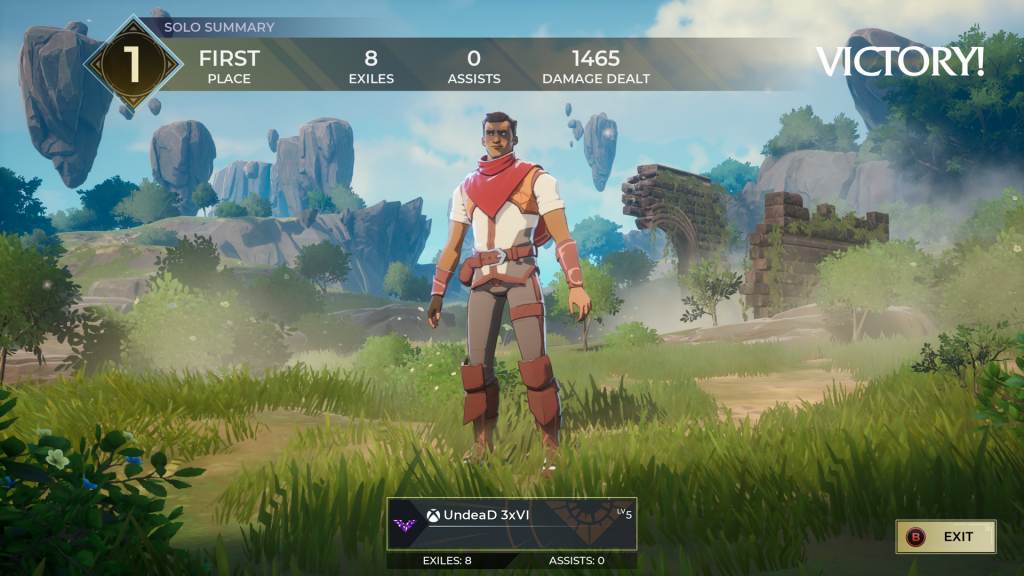 One thing battle royale games are notorious for is poor performance. If anyone remembers the launch state of PUBG on Xbox, you will know what I am talking about. Spellbreak performs exceptionally well, considering all of the action on the screen. During massive 3 squad battles involving upwards of a dozen different powers being blasted and thrown. The game remains stable in its framerate and performance. Having only 42 players per match may have something to do with this seamless performance. The only technical hitch is when you are dropping into the world, there is quite a bit of texture pop-in. However, that always seemed to sort itself out before you even hit the ground.

Despite being free to play, Spellbreak offers a genuinely polished front to back experience. So many multiplayer games seem to struggle to get this right. For a team the size of Proletariat, it deserves a tip of the hat for getting the little things right. Waiting in the lobbies often didn’t take more than a minute or two, and I never had the game crash on me. A bug-free experience goes a long way to crafting a positive experience around a game.

With many of these multiplayer games, how the game is supported going forward is a massive part of how successful a game will be. I had just a few complaints that could be possibly addressed in the future. The first and foremost is the map. As previously stated it is massive, perhaps a variation of the map could be offered that decreases the size. Allowing players to only play in certain portions of the map in order to provide a very tight and frantic combat experience. Because due to no real traversal system outside of powers based around dashing, traveling the map just tedious overall.

There is one particular power that feels incredibly out of place that you can find within the world. This power is invisibility, several times I got myself out of tough situations simply by running around a corner popping invisibility, and then running past the person who had been chasing me. Invisibility is a hard power to balance and often just feel relatively cheap. I clutched quite a few wins due to this power. With no real ability or way to counter it effectively. I am hoping it is something the developers will tweak the balancing on, or remove it from the game entirely.

Spellbreak is a unique take on the battle royale formula packed with a magical flare. It is definitely worth a try if you are looking for a new multiplayer game to fit in your rotation. At the price of free to play, the value offering with this game is fantastic. With a few quality of life improvements, I have no doubt that Spellbreak has a bright future in front of it.