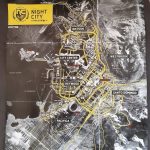 You are reading
Cyberpunk 2077: Physical Map and Post Cards Leaked?

With the Cyberpunk 2077 launch almost upon us, fans can’t wait for November 19th. Fans are clamoring for as much information as possible about the game. Today on Reddit, a now-deleted post showed off what looks like the physical Cyberpunk 2077 map and postcard inserts for the game. 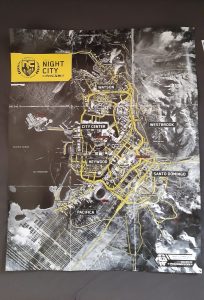 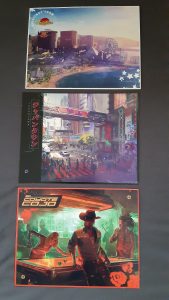 The post was removed by mods for showing leaked content, Siriondel claimed the authenticity of the pictures they took.

“It’s real – you’re gonna have this in your physical copy of the game. I believe you can see the postcard set in promotional images. As for the source, well, I put these on a flat surface and took the photos.”

The map consists of areas we already had knowledge of like the Badlands and the six districts in Night City: Watson, Westbrook, Pacifica, Santo Domingo, Haywood, and City Center. You can also clearly see the much talked about Spaceport. The Cyberpunk 2077 map as expected is smaller than CDPR’s massive Witcher 3 game. However, it is said to be more vertical as many buildings can be explored throughout the futuristic city. The postcards are a really nice addition as I really miss the extra goodies packed inside of a new game (even though I have moved to basically being all digital).

There is no reason to believe these were fakes or doctored but at the moment have not been verified.