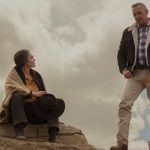 You are reading
Let Him Go Dominates this Weekend

This past weekend the movie releases were slim. So slim that Tenet was able to crawl its way back up to the fourth spot in the domestic box office. However, Let Him Go was able to easily take the top spot.

Let Him Go was able to gross an estimated $4.1 million this weekend. The Kevin Costner film was able to use some of that Yellowstone magic to get people in the theater. The Dark and The Wicked was not the only movie listed as being released that’s not a rerelease. This is another horror film that is trying to capitalize on the fewer releases. It grossed $65,000 in only 68 theaters, a decent number in 2020. With every movie bailing on their release date, the theaters just do not have the same strength as they did last year. Tenet was able to gross an estimated $905,000 this weekend. Bringing the movie to a worldwide total of $350 million. This is definitely well below what Warner Brothers was expecting.

Now the final Fox X-Men movie has still been able to gross more money. The New Mutants made $110,000 this weekend, bringing the total to $45 million worldwide. Expect the movie to release on digital and Blu-Ray on November 17th. With the lack of movies being released, two movies have been fighting for the top spot for a few months now. The War with Grandpa and Honest Thief have traded places more than Eddie Murphy and Dan Aykroyd (1980’s comedy reference). Toy Story was re-released, and it was able to come in at number four. The movie has grossed $505,000 as the series continues to print money for Disney.

At the moment, Vanguard is the next big release to be scheduled on November 20th. The animated film The Croods: A New Age is executed to be released on November 25th. Right now Wonder Woman 1984 has not had the release moved. It might be the only movie to go watch in the theaters if you can find one open. That movie is still set for December 25th. Take a minute to bookmark Lordsofgaming.net for all of your gaming and entertainment news.