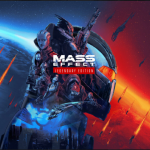 Yesterday, acclaimed RPG developer Bioware teased a big announcement for N7 Day. This is a day with significance for their powerhouse franchise, Mass Effect.  Today, they unveiled the long rumored remaster of the original trilogy of games as Mass Effect Legendary Edition.

The team at Bioware has been working on three projects, the next Dragon Age, their much maligned service game Anthem and now this Mass Effect remaster. The developer promises that this will not be a simple up-res of the series, but will be a modernization. What that means in regards to updating quests and dialogue is not known at this time. However, the games will get quite the 4K facelift in the transition.

Your choices. Your squad. Your Shepard. Relive the legend in a remastered edition of the highly acclaimed trilogy. Mass Effect Legendary Edition arrives Spring 2021.https://t.co/jLUj8FUGaI pic.twitter.com/vxTKyq4LQ1

The remaster will include the single player portions of Mass Effect, Mass Effect 2, Mass Effect 3, and all the DLC. The most surprising bit about this announcement is that the remaster is coming to Xbox One, PS4, and PC in the Spring of 2021. Xbox Series X and PS5 enhancements will be coming later on. Given the high profile nature of the new consoles, having these available at launch would have been nice to see.