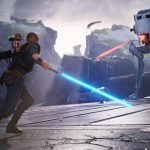 You are reading
Star Wars Jedi: Fallen Order Is Coming To EA Play

With next-generation just around the corner, the last thing on many people’s minds is probably adding more games to their backlog. However, with the prospect of full backward compatibility on both PlayStation 5 and Xbox Series X, the backlog certainly won’t be getting any smaller. Today, a big title from EA and Respawn Entertainment was announced to be coming to EA Play later next week. Fans of the Star Wars IP will be particularly excited for this addition to EA’s subscription service.

Today, in an official blog post from EA, it was announced that Star Wars Jedi: Fallen Order will officially be coming to EA Play next week. On November 10th you will be able to download and play Star Wars Jedi: Fallen Order in its entirety as part of your EA Play Subscription. The game was an astounding breakout game for its developers Respawn Entertainment, in the company’s first step outside of the FPS genre. On an interesting side note, the day that Star Wars Jedi: Fallen Order joins EA Play is the game day that the service merges with Xbox Game Pass Ultimate. This also means this game will be able to play as part of your Game Pass Ultimate subscription on launch day. As both the Xbox Series S & X will be launching officially on November 10th, 2020. If you have not had a chance to pick up this game when it launched or on sale over this past year. Then you might just want to give this game a shot next week when you pick up your Xbox Series X or S.