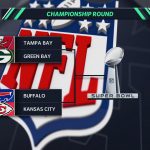 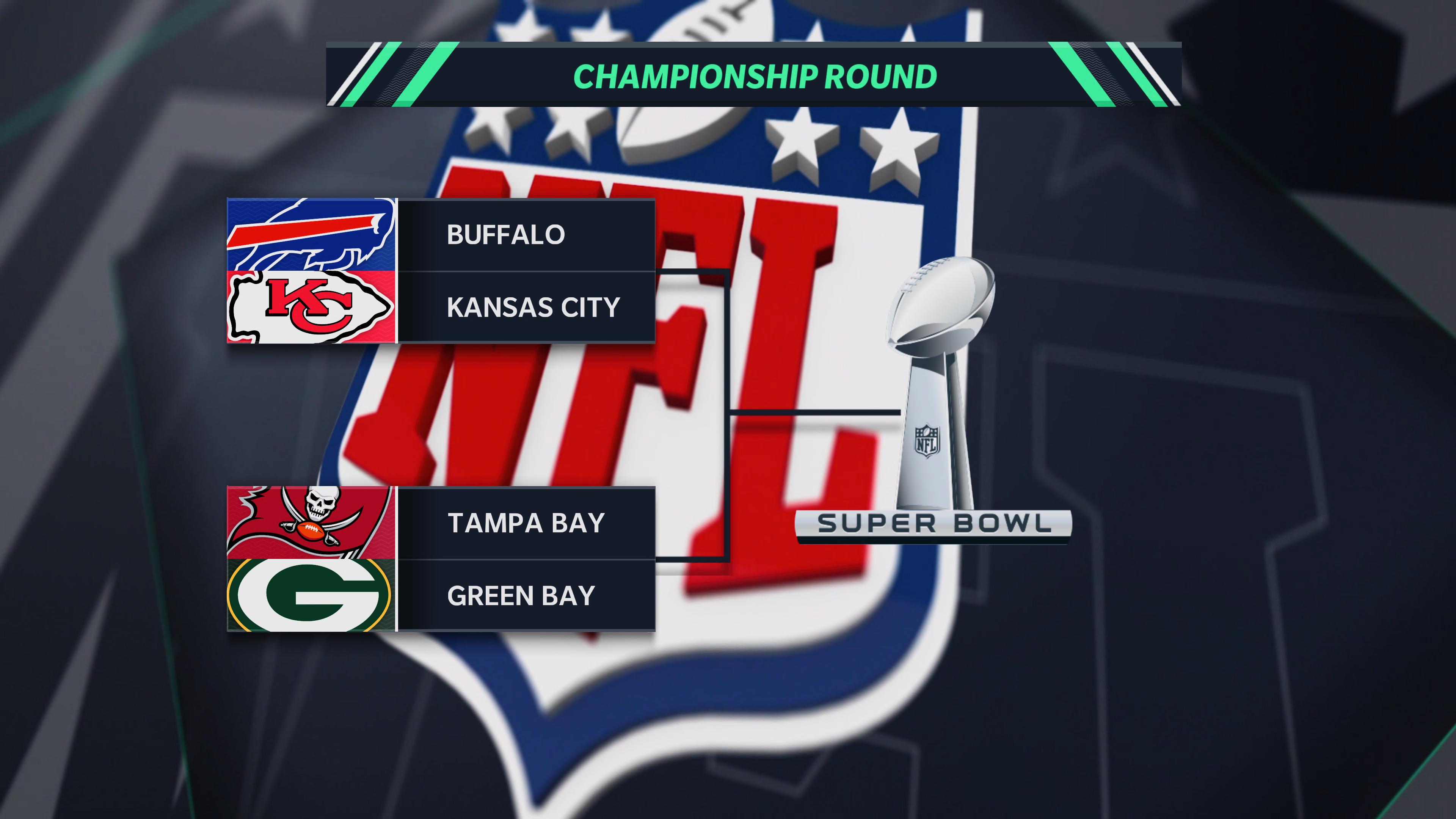 This weekend the Buffalo Bills will head to Kansas City to take on the Super Bowl Champs in the AFC Championship game. We wanted to run the game through five Madden simulations and see if the game can accurately forecast the outcome. For our simulations, we are running Madden 21 on the latest version as of January 22nd. In addition to the score, we will look at the stats of the top skill position players. This will give us a closer look at how close Madden can get to accurately simulating outcomes.

My first impression when looking at these numbers is that Madden believes Kansas City is going to put up some points this weekend against Buffalo. In three of the games, Kansas City scores 38 points or more. Statistically, KC is ranked fifth in points scored on the season while Buffalo is third in scoring. This may have more to do with the fact that Kansas City is ranked number one in first downs and ranked number one in passing yards. Although Buffalo is able to hold Kansas City to under 25 points in the final two simulated games. 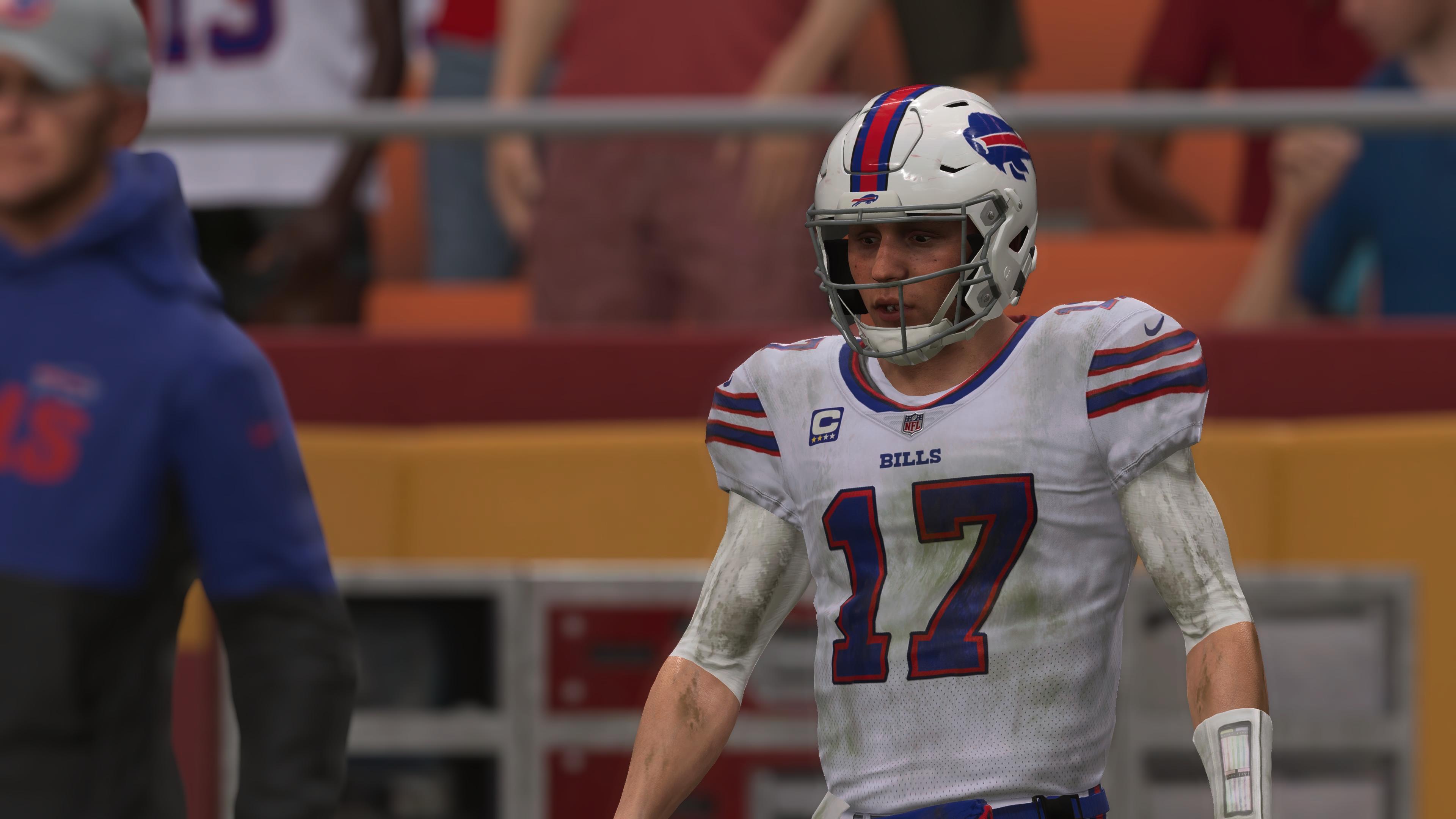 While looking at the stats of the last two games to see what was different there, Madden has two mistake-filled scenarios where the Cheifs just have bad games. In those last two games, Kansas City has more than double the penalty yards of Buffalo and a negative one turnover margin. It appears as if the Madden simulations are trying to say Buffalo is going to need a lot of help to advance on to the Super Bowl this weekend.

The Madden simulations are calling for Mahomes to win this battle in a landslide. Madden predicts a very high probability that Mahomes will throw for at least 400 yards and two touchdowns. While Buffalo’s Josh Allen will throw just under 300 yards. The projections are also showing an almost certainty that both will throw at least one interception during the game. This is actually something that Buffalo fans may want to look forward to. During the fifth simulated game, Buffalo takes advantage of two Mahomes turnovers winning that game. While simulated games also show that it’s nearly impossible for Buffalo to win without Josh Allen throwing for two or more touchdowns. 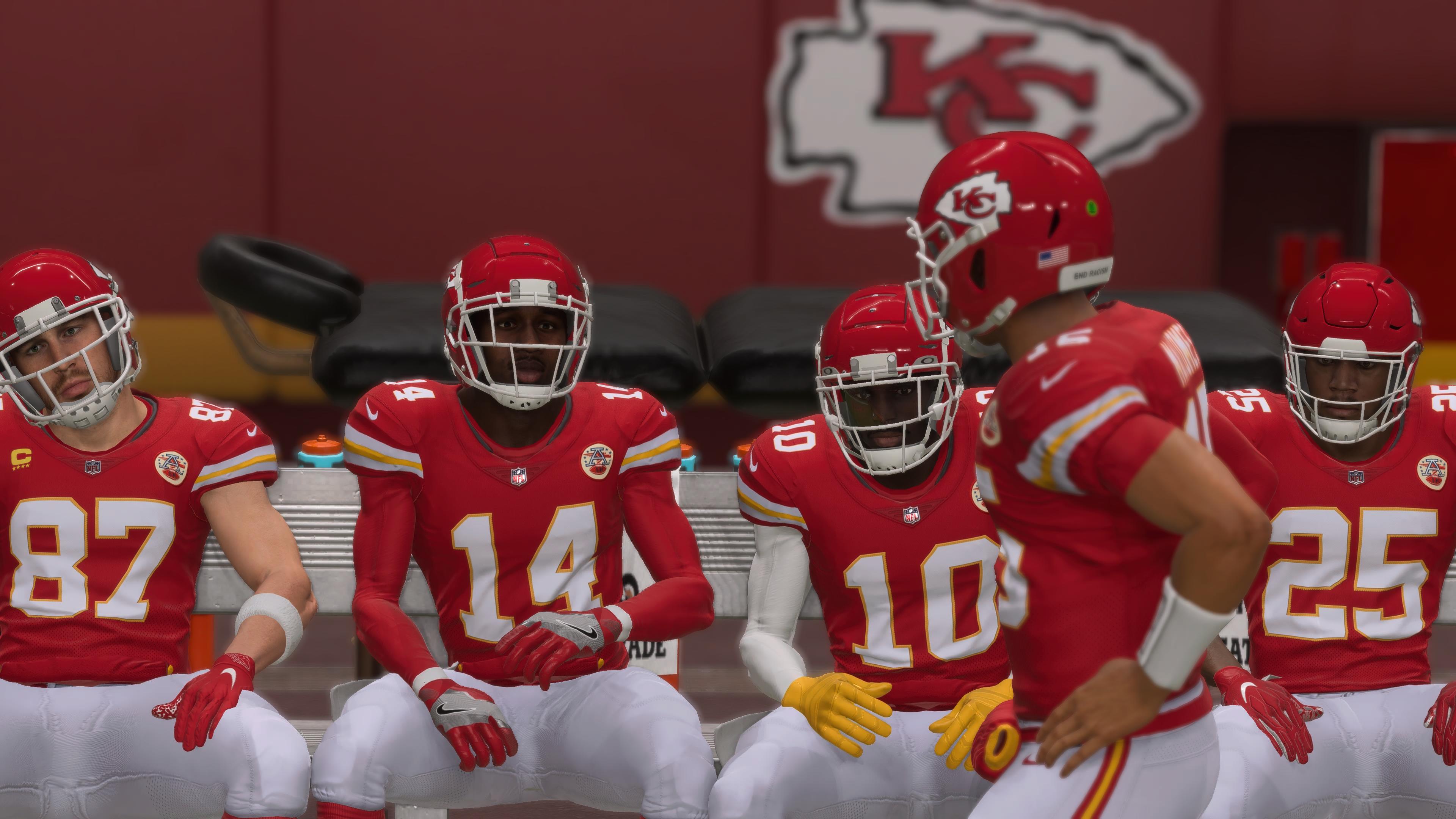 If you are looking at Stefon Diggs’s numbers for the first simulated game you are probably scratching your head. Early on in the game, Diggs fumbles the football after a catch. He is then removed from the game due to injury and doesn’t return. If you remove that game Madden is projecting him to approach 60 yards and one touchdown. Alongside Diggs, Madden loves Cole Beasley in this matchup, aside from the fifth simulated game. They also project a very high probability of Buffalo Tight-End Dawnson Knox making an impact with 50 yards and a touchdown. 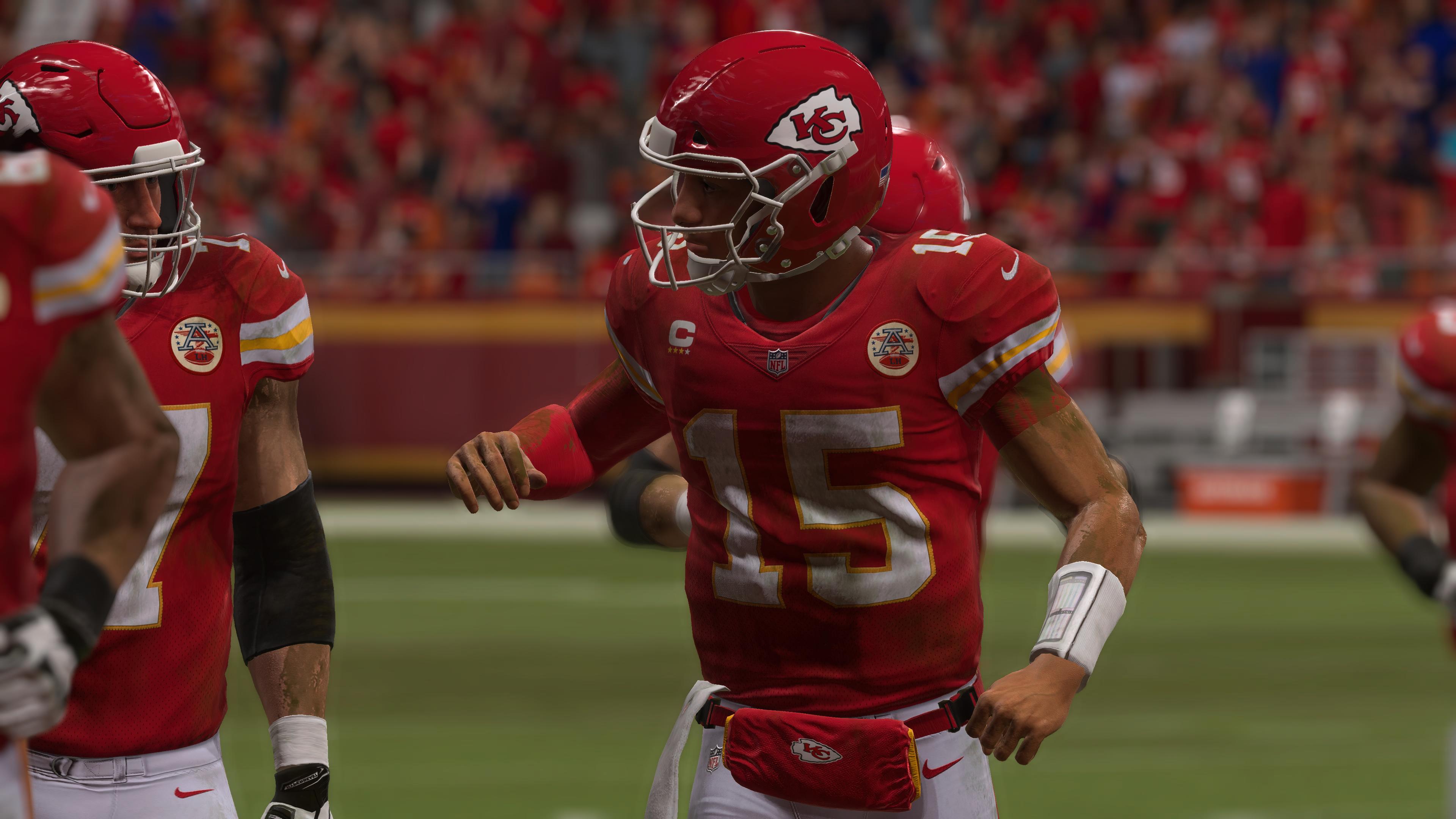 Right away you will notice that if Buffalo is able to contain Tyreek Hill, it greatly improves their chances to win the game. Hill is ranked number two overall in terms of catching touchdowns according to Pro Football Focus. Madden is projecting a very high probability that Hill will have a touchdown. You will also notice that Mahomes spreads the ball around more. Watkins, Hardman, and Robinson are all just as likely to have big games as the number three option next to Hill and Kelce. This seems fairly consistent with how the season has progressed thus far.

What isn’t shown here is the 51 rushing yards Buffalo QB Josh Allen accumulates in a win during game five. Yet what is shown here, are broken Le’Veon Bell projections. This is where Madden loses me as a fan. Le’Veon Bell has rankings consistent with his abilities. Unfortunately, due to being stranded on the Jets for two seasons and not being able to become a ligament threat in Kansas City, these projects have now become entirely inaccurate. 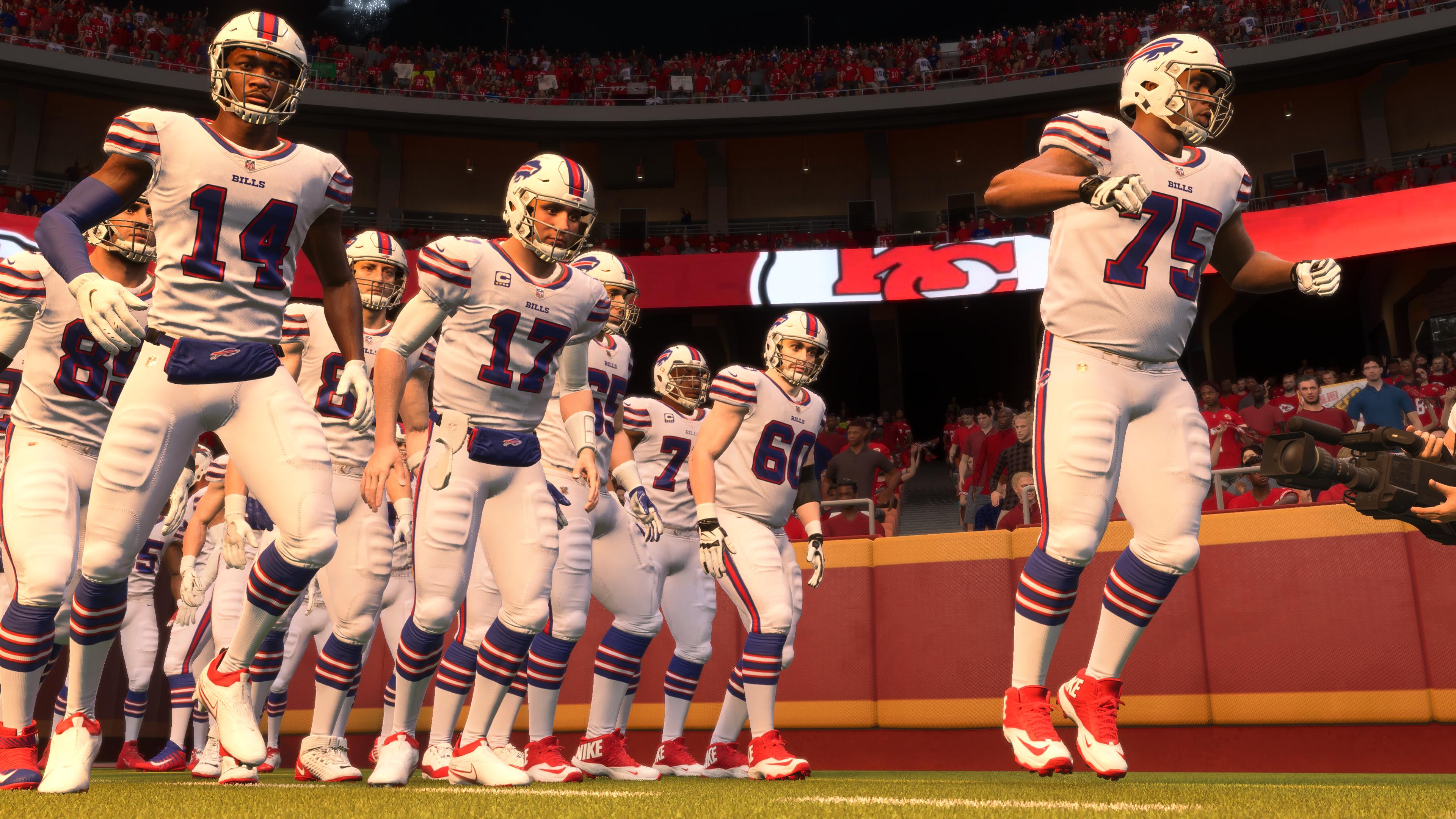 The simulation has Bell overtaking rookie RB Clyde Edwards-Helaire and becoming a much larger part of the offense. This is completely disconnected from reality. Madden not being able to explain what has happened with Bell isn’t far off from any other NFL analysis. Although Madden needs to be a better job projecting snap counts and carries based on the reality of a week to week basis. The receiving totals and the rushing totals for Kansas City are now entirely broken. That is of course unless Bell has a breakout game against Buffalo. It’s very unlikely that the volume of opportunity is even there for him to reach these totals.

The ball is spread around so much in Kansas City, I almost failed to notice that they scored five touchdowns in their three wins over Buffalo until I looked at the kicking. Madden has Butker to be a lock during the AFC Championship game, kicking a perfect 29 for 29 over five simulated games. Buffalo’s kicker Tyler Bass misses two field goals in Buffalo victories. Something I am sure Buffalo fans will get over. The weather forecast for the game calls for 15 to 12 mph winds, with around 30-degree temperatures. With that, it won’t be a kicking dual in Kansas City but in a close game, Madden gives the edge to Butker.

What The Madden Sim Is Projecting 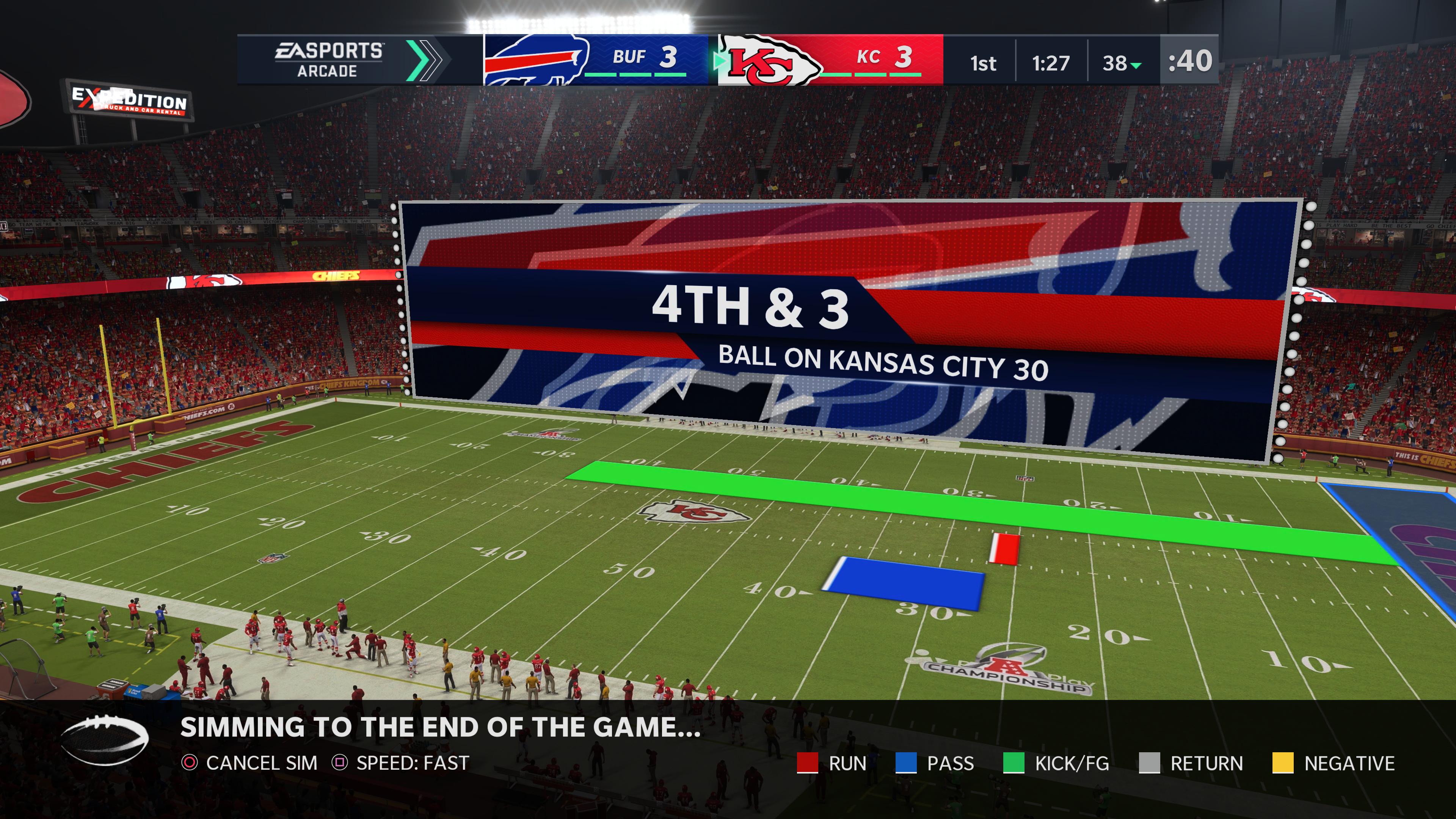 On three straight simulations Mahomes and the Cheifs score five touchdowns. Undoubtedly this isn’t out of the question of becoming a real possibility. With that, the Bills are good, but, they aren’t five touchdowns against the Cheifs good. If those first three simulations become reality this game won’t be close. Yet, Madden loves Buffalo if Mahomes makes mistakes and Buffalo counters with a solid running attack.

On the flip side, in two of the first three games, Buffalo running backs Singletary and Yeldon fumbled the ball leading to Kansas City touchdowns. The Madden projections do call for a number of turnovers, something to keep an eye on this weekend. While the KC player projections are likely broken due to Bell’s lack of production, Madden could be on to something here with the turnover margin defining the outcome of the game.