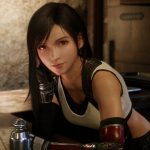 Officially titled Final Fantasy VII Remake Intergrade, the PS5 version will release on June 10. It will include a brand new DLC episode featuring the spunky ninja Yuffie Kisaragi. Fans will play as Yuffie in this new adventure as she infiltrates Shinra Corporation. This standalone DLC will only be featured in the PS5 version of the game, so PS4 players out of luck here. Those who do own a copy of Final Fantasy VII Remake on PS4 can upgrade to the PS5 version for free and can purchase the Yuffie episode separately. PS4 users can also carry over their save data. The set of enhancements in FF7R Intergrade include:

According to a Famitsu interview, FF7 Remake Director Tetsuya Nomura says he will not be acting as the director for the second chapter for Remake. Nomura cites that he is working on too many projects, so FF7R Co-director Naoki Hamaguchi will be promoted to director for future Remake titles. Nomura will serve as the Creative Director from now on until further notice. For more information, be sure to follow @aitaikimochi on Twitter for live translations of the interview.

Square Enix Has Another FF7 Remake In The Works

In addition, Square Enix announced two Final Fantasy VII-related mobile projects. The first is Final Fantasy VII The First Soldier, a battle royal action game set in Midgar. The second is Final Fantasy VII Ever Crisis, a chapter-based game covering the entire FF7 timeline. Seen as another remake, Ever Crisis will cover the original game and all of the FFVII compilation titles. This includes the events of Crisis Core, Advent Children, Dirge of Cerberus and more. Both games will release on mobile some time in 2021 and 2022, respectively.

For the music enthusiasts, head over to your favorite music subscription service on Feb. 26 to listen to Final Fantasy VII Remake‘s 156-song soundtrack. Announced on Twitter, the album will be available to stream on Apple Music, Spotify and Amazon Music Unlimited.

Final Fantasy VII Remake Intergrade launches worldwide on June 10, 2021 for PS5. It is available to pre-order now. If have not checked out 2020’s RPG of the Year, read our review to see if it is worth your time.