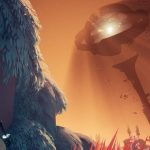 You are reading
Solar Ash Gameplay Revealed On PS5

Solar Ash gameplay plays exactly as it looks. Heart Machine, the developer behind 2016’s Hyper Light Drifter, showed off Solar Ash’s gameplay and more at Thursday’s State of Play. Instead of just an interesting art style, we now know what the gameplay is like, and what is happening in the story. Here are the important to know about this upcoming release:

Save Your World… in the Middle of a Black Hole

In Solar Ash, you control Ray, whose world fell into a black hole called the Ultra Void. You must get it out before it is completely swallowed up. To do that, you need to face the violent and grotesque creatures that lurk in the black hole. Since Ray’s homeworld is now in the black hole itself, that means these monsters now seep into their homeworld too.

Fortunately, Ray is a fast void runner who is willing to take the hail-Mary shot at saving her homeworld.

Solar Ash gameplay builds off her speed. During the trailer, Ray skips across clouds and clears chasms in this speed and movement-oriented game. When airborne, she can grapple with a rope of light to launch herself towards a point. During the reveal, Alex Preston, Creative Director for Solar Ash, compared the movement to skating.

“On the ashen clouds, she can quickly cover great distances in our huge world.” He would later go on to state combat and controls are meant to be “simplistic” to maintain the quickness of the game.

All of this is good, because she will need to keep up with the Ultra Void’s beasts.

Dark Creatures are Consuming This World

“Grotesque and violent creatures,” as Preston calls them, swarm Ray’s world. Further, these creatures scale harder through the game, meaning Ray will need to hone her skills to save her home. While controls remain simple, certain creatures will need precision timing and skills to overcome. Of these creatures, Sentinels present the greatest threat. In addition, Sentinels “hold the key to [Ray’s] quest.” The demo showed parts of a Sentinel boss fight. This sentinel was a giant sky serpent, whose back Ray raced along towards its head, conjuring Shadow of the Colossus flashbacks.

Solar Ash will release on PS4 and PS5 consoles later this year. For the full trailer, look down below: