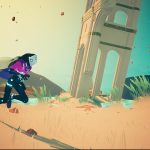 You are reading
PS5 Reveal Event: Solar Ash is Coming in 2021

During the PlayStation 5 reveal event, we have seen so many wonderful games. Let’s add another game to the list of must-play titles on the new console. Solar Ash is coming to players from the studio that brought you Hyper Light Drifter.

Solar Ash will be the second game from Heart Machine. The developer created one of the hardest games I’ve had the pleasure of reviewing in Hyper Light Drifter. Take a look at the trailer below.

In Solar Ash, players find themselves in a place called the Ultravoid. It’s a rift that is traveling through space and swallows up different worlds. This is where you will be spending most of your time in the game. Just like Hyper Light Drifter, this new game has underlying meanings and messages that the developers hope to help gamers. Alex Preston, the head of Heart Machine Studios, had this to say about the meaning behind their second title:

“Has been about reflection and progress in many ways. Our ambitions are bigger and the team has grown to match. The story still remains personal, but evolves to be something beyond just the weight of the struggle into something more hopeful.”

Solar Ash is listed as coming to the PlayStation 5 and PlayStation 4 in 2021. Expect more news about this game in the next few months. If you missed out on some of the stories from today’s reveal click this link.