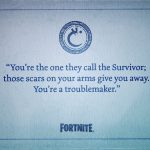 You are reading
Fortnite’s Next Crossover is With…Mistborn?

In one of the more left-field announcements, Fortnite will next be crossing over with Mistborn. Mistborn is an acclaimed series of fantasy novels written by Brandon Sanderson. Sanderson is best known for his work on finishing the Wheel of Time and The Way of Kings.

In the world of Mistborn, people can use a type of magic called Allomancy, which ties magical effects to the burning of different metals.

This teaser image was tweeted out by the official Fortnite twitter account earlier this evening. The symbol at the top is the symbol for burning iron, which allows wielders to Pull nearby metals. The complete list of metals and powers is listed below:

Of the Mistborn metals, the most likely candidates for inclusion into Fortnite are the top 6. These can also quite easily be converted into buffs for characters in game. This is a fascinating experiment and definitely out of the ordinary considering the typical pop culture crossovers the game is used to. Nevertheless, as a fan of the books, I am very intrigued. Bring on Dalinar in plate.

Given that all his books take place in a single universe, it could be the start of a very big crossover indeed.