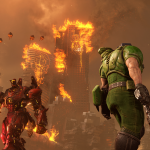 You are reading
Doom Eternal’s Next Generation Patch Has Arrived

Doom Eternal was no doubt one of the best games of 2020. Featuring fast-paced rip and tearing FPS action, the sequel to 2016’s Doom remake was a spectacular game from front to back. Now players who have been lucky enough to upgrade to a new Xbox Series or PS5 console in the past year can experience it all over again with a next-generation coat of paint. Doom Eternal’s future is full of raytracing and glorious demon killing.

To Hell And Back

Doom Eternal’s next generation patch is officially here, bringing with it a host of new features that Xbox Series and PS5 owners will be able to experience for the first time. A fidelity mode that features 4k, 60 FPS action-packed demon-killing with raytracing to boot, hell has never looked this good. There is also a performance mode that will allow console players to experience Doom Eternal at a heart-racing 120 FPS which makes the game feel even smoother. PC players will be able to experience raytracing in all its glory as long as they have GPU that supports the feature. Here is the full breakdown of modes that will be available on PS5 as well as Xbox Series X and S consoles.

Is it a free ride to hell?

Both the Xbox Series versions, as well as the PS5 version, allow players to upgrade to the next generation version absolutely free of charge. Xbox players will have the update available via Smart Delivery and will simply have to update the game to experience Doom Eternal in its next-generation form. PS5 owners will have a similarly simple process, as they will just have to go to the PlayStation Store and upgrade their copy of the game to the PS5 version. Then you will be able to take the battle to the demons of hell on your platform of choice.