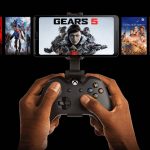 While Android users have been able to enjoy Xbox Cloud Gaming for the past months via the beta app on Xbox Game Pass. While it has been well documented why iOS users were left behind in regards to having an official app to use. Apple’s story policy created issues for Xbox to put the app on Apple devices. However, as of today iOS users, as well as PC players, will now be able to experience Xbox Cloud Gaming for themselves.

Head in The Clouds

Today, in an official blog post from Xbox, they announced that iOS and PC players will now be able to experience Xbox Cloud Gaming via a web browser. Starting today Xbox Game Pass Ultimate members will be able to access Xbox Cloud Gaming via their devices web browser. Whether you play on a Windows 10 PC, an iPhone, or iPad you will be to game on the go via Microsoft’s cloud servers. All you have to do is go to xbox.com/play and you can jump right into your favorite game in no time. This feature is now available in over 22 countries around the world, offering one of the largest international rollouts we have been from Xbox in regards to a new feature. Here is hoping more and more updates from the company are this internationally available.

Also revealed in the blog post was that there has been an upgrade in terms of Xbox’s Cloud Gaming servers. The servers have been upgraded to custom Xbox Series X hardware, which has allowed Xbox to deliver a higher quality experience for their customers. This is only the beginning as within the announcement it is stated that they are going to continue to push and innovate the cloud gaming experience.

“We’ve been upgrading Microsoft datacenters around the globe with the fastest, most powerful Xbox hardware to give you faster load times, improved frame rates, and an experience of a new generation of gaming. To ensure the lowest latency, highest quality experience across the broadest set of devices, we will be streaming at 1080p and up to 60fps. Going forward we’ll continue to innovate and add more features to enhance your cloud gaming experience.”

Xbox Cloud Gaming In The Future

There is no doubt that Xbox is all in on cloud gaming, and it will be interesting to see how the service continues to evolve as it gains more and more users in the coming years. Here is hoping that we will continue to see big improvements in the future.

Will you be trying out Xbox Cloud Gaming? Let us know in the comments and don’t forget to check back for the latest gaming news and information.