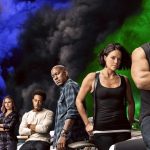 You are reading
Fast 9 Takes the top Spot This Weekend

Over the last few weeks, horror movies have taken the top spot. This past weekend A Quiet Place Part II was dethroned by Fast 9. The delayed movie was able to take in a huge amount of money during its first weekend.

Fast 9 was delayed when the COVID-19 pandemic started. Some fans were clearly upset at that moment, it just doesn’t show right now. With $70 million in its first domestic weekend, this film should easily cross $500 million. Vin Diesel’s ninth film has been out for some time in the International market. At the moment this film is sitting on $334 million Internationally and $404 million worldwide. One of the more notable things in this film is that the character Han has been brought back from the dead.

During the 4th of July, the weekend viewer will be getting three new movies. Zola, The Boss Baby: Family Business and the Forever Purge will be coming out. Expect the Forever Purge to get into the top three movies during the holiday. Take a moment to look at this guide on the recently released Chivarly 2. Our writers take a lot of pride in their work and it shows with this article. Also, take a moment to bookmark Lordsofgaming.net for all of your gaming news.