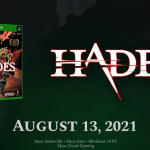 Hades is possibly one of the most critically acclaimed roguelikes that have released in recent memories. Receiving several award nominations in the 2020 Game Awards, Supergiant Games definitely hit gold with Hades. However, the game only released on Nintendo Switch and PC, that however is going to change this August.

As revealed during the Xbox E3 conference, Hades will be coming to Xbox on August 13th, 2021. Not only that, but the game will also be coming to Xbox Game Pass at launch in August alongside Psychonauts 2. This will be the first time Xbox players will be able to play this GOTY worthy roguelike, it will be interesting to see how the game is received. Check out the brand new trailer below for some info on the game’s epic story and gameplay.

Will you be checking out Hades when it launches in August? Let us know in the comments and don’t forget to check back for the latest gaming news and information.