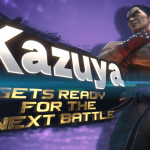 E3 is coming to a close. Nintendo held its conference today as fans had high expectations going in. Despite the absence of a Switch Pro reveal, Nintendo had a stellar performance. They started the show with gusto as a new fighter is coming to Super Smash Bros. Ultimate.

Kazuya Mishima is the latest character coming to the party brawler. Kazuya has been a long-standing character within the Tekken franchise. He began as the main protagonist in the first game, then converted into an antagonist for the rest of the series.  Kazuya is also viewed as a popular mascot for the fighting game community along with icons Ryu and Terry Bogard who are already in the game. Additionally, iconic music and a new stage from the world of Tekken will be coming to the game. Heihachi Mishima is featured in the stage’s background.

Masahiro Sakurai (Director of Super Smash Bros. Ultimate) aimed to catch the feel of Tekken when designing Kazuya for Smash Ultimate. As a result, Kazuya has a plethora of moves in his arsenal. This includes a ten-hit combo taken straight from Tekken. He can also transform into his Devil form. Those wishing to view a deeper dive should tune in for Sakurai’s exhibition of the character on June 28.

Tune-in on 6/28 at 7am PT for a deeper look at the new Super #SmashBrosUltimate DLC fighter, Kazuya Mishima, with Director Masahiro Sakurai. He will also reveal the fighter’s release date! pic.twitter.com/nLGBE95UrI

Super Smash Bros. Ultimate is a crossover fighting game unlike any other. This installment has featured more third-party characters than one would ever come to expect from a Nintendo property. No other licensed game exists where Sephiroth (Final Fantasy 7) can fight Steve from Minecraft. Although, an argument could be made for Fortnite.

However, each of these guest fighters introduced retain the personality and feel from each of their IPs. A clear contrast from the skins approach used in Fortnite. This has only been possible by the connections and passion Sakurai has possessed in the video game industry. For that reason, a fan’s passion can be seen with each new stage or fighter. Sakurai has a clear love for these franchises and Super Smash Bros. Ultimate. Are you excited about Kazuya Mishima? Let us know in the comments down below.