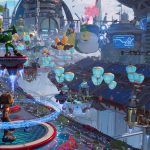 You are reading
Ratchet and Clank: Rift Apart Is The Definitive PS5 Game

Ratchet and Clank is one of PlayStation’s most iconic franchises that has spanned 3 generations of PlayStation. From the original Ratchet and Clank on the PS2 that released all the way back in 2002 to now, the franchise has stayed fresh and relevant. The last installment in the franchise was a reimagining of the original game for the PlayStation 4 that released back in 2016 to much fanfare. Now Insomniac Games returns once again with Ratchet and Clank: Rift Apart that has been touted as the premium next-generation PlayStation 5 exclusive. After completing the game, and getting halfway through a new game + playthrough, I definitely think Insomniac Games has truly knocked it out of the park once again.

Bringing The Past To The Future 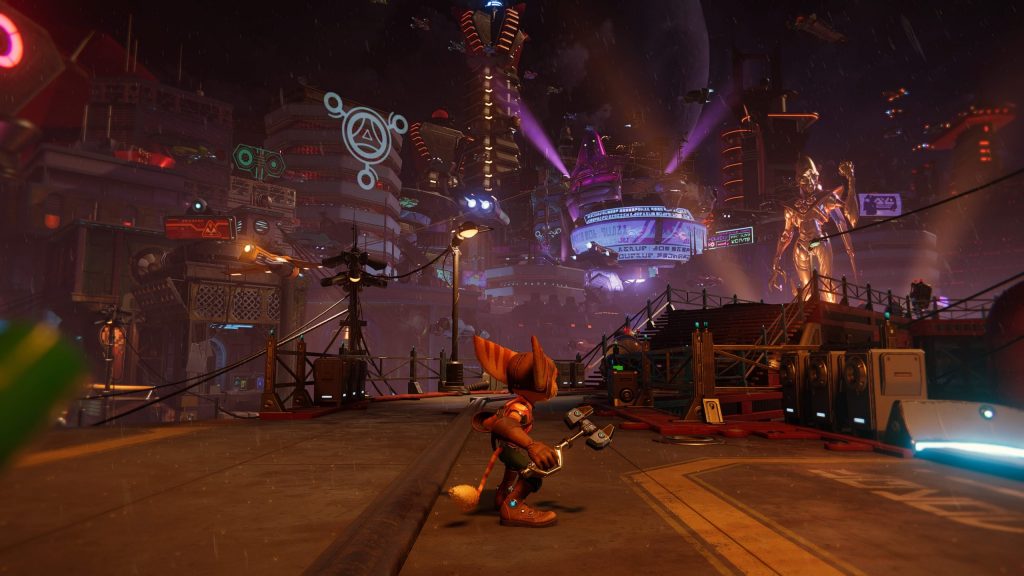 First and foremost, Ratchet and Clank: Rift Apart remains true to the franchise’s classic gameplay loop, with some modern quality of life upgrades thrown into the mix. Dr. Nefarious is up to his old tricks and has managed to tear holes into alternate dimensions using the newly reassembled dimensionator weapon. As the world begins to get torn apart by rifts and portals between many different dimensions, it is up to Ratchet and Clank, as well as a cast of new characters to stop Dr. Nefarious once again. Classic characters like Captain Qwark are still here, but there are a host of great new characters as well. Most notable is the new hero, Rivet, who is the Lombax counterpart to Ratchet in Rift Apart. There is also a cross-dimensional Dr. Nefarious, who turns out to not be as incompetent as the original. The blend of classic and new is a theme I quickly noticed during my time with Rift Apart.

This game pulls from a ton of classic Ratchet and Clank games that many longtime fans will fall in love with. However, newcomers to the franchise will be able to get in the grove in no time as well. As someone who played only a handful of prior installments, I found it incredibly easy to just jump in and fall in love with the cast of characters. One of the biggest hurdles many IPs struggle with is maintaining their identity while also keeping up with the modern standard many players have come to expect. This is an area where Rift Apart really shines through. Front to back, it felt like a classic PS2 adventure title, that would fit alongside such classics as Sly Cooper, Banjo Kazooie, and many more. But, it also felt incredibly modern in its design, as mobility and fluidity were a major focus. While I absolutely love some of the classic PS2-era games, some of them simply are impossible to go back to with how clunky many of them feel in terms of overall control. Rift Apart feels like it will age beautifully, from combat, to rail grinding to everything in between it feels absolutely seamless and natural to control both Ratchet and Rivet. It would have been incredible if Ratchet and Rivet felt a little bit more unique aside from obvious visual differences. But, with the gameplay being so smooth it’s easy to forgive this level of detail.

Respecting Your Time And Difficulty Options

Many games these days feel bloated with side content, collectibles, and mindless busy work in order to pad out the run time. However, Ratchet and Clank: Rift Apart does not do this, not even a little bit. I platinumed the game after 14 hours of play and found almost all the collectibles and goodies on my first run. Almost all the collectibles tie into optional bonus gear, that will reward you for hunting them down, but players also will not miss anything important if they decide to just focus on beating the game. Ratchet and Clank: Rift Apart respects the player’s time and does not overstay its welcome. It is a fun and action-packed adventure from front to back. While some players may bounce off of the simple story, I ultimately found it fun and charming with some incredible and personal moments.

One aspect I especially appreciated was the wide range of difficulty modes that are available in the game. While I had no problem playing the game on Normal, when my 4-year-old daughter saw me playing, she wanted to jump in and play as well. On the easiest difficulty mode, you cannot die no matter how much damage you endure. While 98% of players will likely never touch this difficulty setting, getting to watch my daughter jump in and learn the game at her own pace, and to eventually bump up the difficulty to chase the challenge was one of my favorite moments of Rift Apart. Difficulty options should never ruin a game.

Combat and Adventure With Dualsense 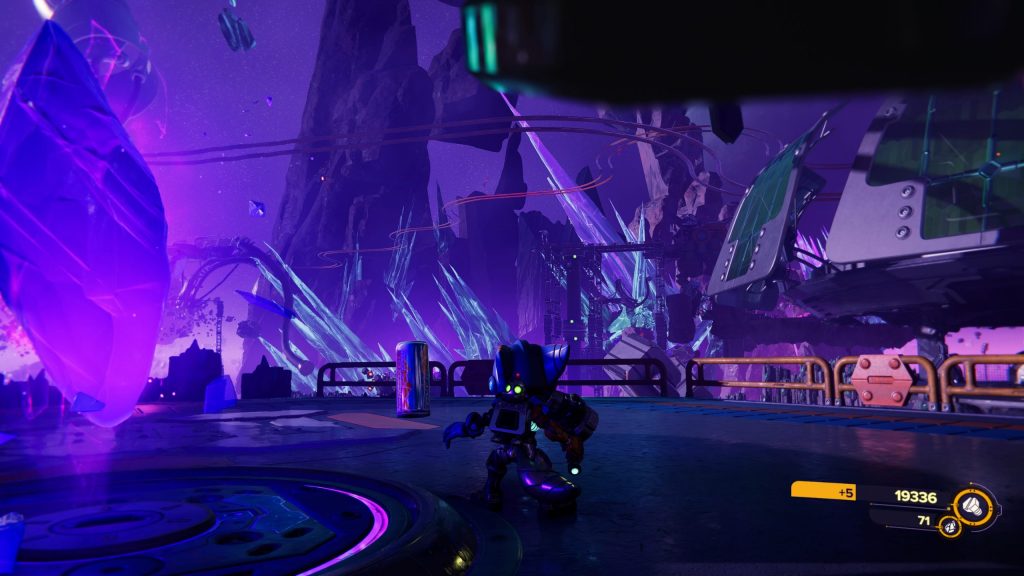 Combat has always been phenomenal in the Ratchet and Clank franchise, and Rift Apart is no exception. The sheer volume of weapons you acquire by the end of the game is jaw-dropping. With 3 weapon wheels worth of destruction at your disposal, you will quickly end up finding weapon combinations that really click with how you want to handle the endless hoards of enemies Dr. Nefarious will throw at you. With many shooter-focused games, there are often guns that simply aren’t useful or fun to use, somehow Rift Apart manages to avoid this. As I found myself cycling and using almost all of the weapons, especially in the later levels.  There is simply a gun for every occasion, whether it’s a minigun that shoots small black holes or a turret that turns your enemies into shrubberies. Variety is the spice of life, and Insomniac Games certainly understands this. Each gun has its own variety of upgrades and unlocks that can make them super-powered in no time.

Some of the reasons these guns pack such a wallop can certainly be attributed to the PlayStation 5’s Dualsense controller. Much like Returnal, the haptic feedback in Rift Apart makes every gun “feel” incredibly different. When you blast through a large group of enemies with the shotgun-style Enforcer you feel every round pound your enemies backward. Grinding on rails feels more immersive than ever before, it still feels strange to have so much vibration and movement coming from the controller. However, Ratchet and Clank: Rift Apart has some of the best implementations of the Dualsense so far. It makes me excited to see what Insomniac Games will be able to do with these features in the future. 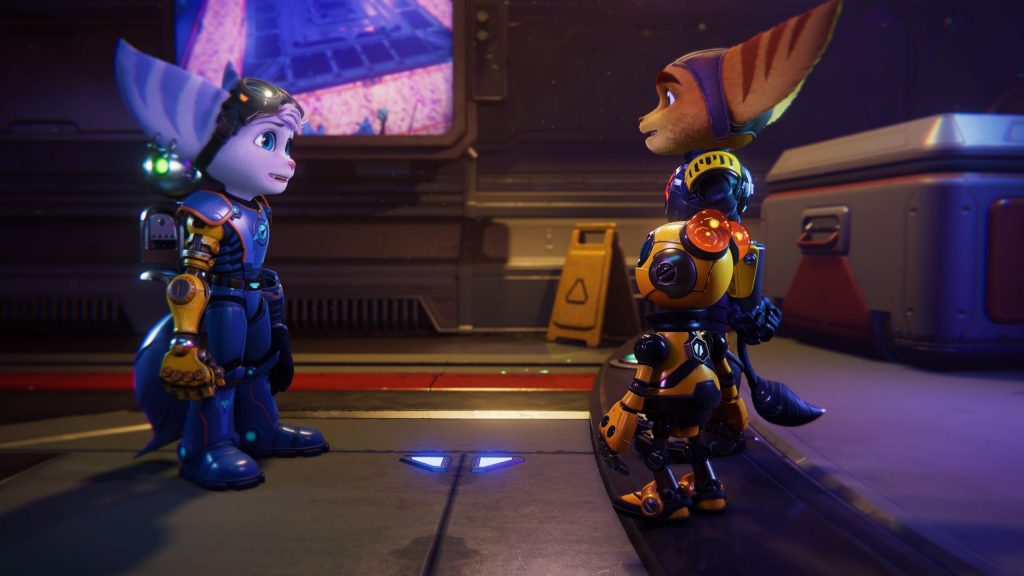 Now there was no doubt that Ratchet and Clank: Rift Apart was going to be a graphical showcase as much of the promotional material from Insomniac was impressive. However, plaything through the actual game, and seeing it in motion truly is astounding. When we talk about graphical showcases in the console space last generation, typically games like The Last of Us Part II, and Ghost of Tshushima have often been considered the most impressive PlayStation 4 games. However, Rift Apart takes the crown as possibly the most beautiful game on PlayStation 5, and it’s honestly not even close. From the expansive worlds that are incredibly beautiful and vast to the amount of detail put into the character models. Everything is gorgeous. As someone whose last Ratchet and Clank game was back on the PlayStation 2, to see Ratchet portrayed in such intense detail, such as being able to see individual hair strands on his character model. It feels incredible to see how far this franchise has come in all aspects.

I have to tip my hat to Insomniac Games in terms of the options that they provide players in terms of fidelity and performance. While they have the standard performance, or fidelity options, which is essentially 4K with raytracing at 30 FPS versus 4K at 60 FPS without all the ray tracing enhancements. However, there is a third mode called Performance RT which switches to an upscaled 4K, but enables raytracing and 60 FPS. This is the mode that I played from the beginning all the way to the end, it was simply stunning.

Ratchet and Clank: Rift Apart Is Best In Class On PlayStation 5