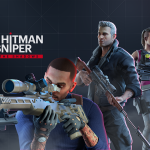 The Hitman series has seen a resurgence in recent years thanks to the fantastic games from IO interactive. Now, following Agent 47’s disappearance, players must strike from the shadows.

Hitman Sniper: The Shadows introduces a wholly original story set in the Hitman Universe. The game focuses on events following the disappearance of Agent 47 and follows the story of The Shadows, a group of highly skilled snipers – Soji, Kiya, Kolzak, Knight, and Stone – within the hidden world of assassination, where a new criminal network threatens global stability. Diana Burnwood and the International Contract Agency (ICA) activate Initiative 426, aka The Shadows, to eliminate this threat. Hitman Sniper: The Shadows is a free-to-play game set to be released in 2021 on iOS and Android. More exciting updates will be revealed later this year.