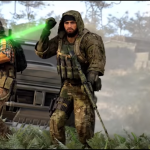 Sometimes gaming announcements take us by surprise. This surprise is usually caused by one of two factors. The first being that the IP tied to the announcement has been dormant for so long that it is genuinely surprising to see a new game installment in the series. Then the other and honestly more common reveal is when an IP goes into a brand new direction that many fans feel conflicted about. Unfortunately, today’s reveal from Ubisoft certainly falls into the latter category with the reveal of Ghost Recon Frontline. During today’s celebration of 20 years of the Ghost Recon franchise, a brand new installment in the series was revealed. Ghost Recon Frontline takes the long-running tactical shooter franchise in an all-new direction. Ghost Recon Frontline is a free-to-play battle royale experience from Ubisoft Bucharest, the developers behind Breakpoint and Wildlands the previous installments in the series. Frontline is a PVP-focused experience and looks to offer players a more tactical and unique experience in the battle royale genre. In an official press release from Ubisoft, they detailed the following about their goals with Frontline at launch.

“In Ghost Recon Frontline, players will discover Drakemoor island, an open world full of diverse landmarks and biomes. The game features a large set of tactical support tools, offering players complete freedom in strategic gameplay throughout various game modes.  Expedition, the game’s flagship mode, offers a new take on the battle royale genre. Featuring more than 100 players in teams of three, these squads will have to work together to complete dynamic objectives across the massive open map with no converging circle. Once players are done collecting intel, they will have to head to a drop zone and call for an extraction. When initiated, all teams will know the position of the extraction and will try to intervene, players will have to play tactically to successfully escape and win the match. Additional modes will also be available at launch.”

In addition to this information, they also launched a brand new trailer to give players an idea of what to expect in Ghost Recon Frontline. The game will be going into closed testing on October 14th on PC in Europe. If you are interested in testing Ghost Recon Frontline you can register for testing here.

Are you interested in Ghost Recon Frontline? Let us know in the comments and don’t forget to check back for the latest gaming news and information.