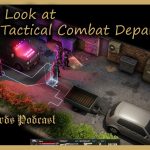 Our very own Lord Snalydo gives us a first look at Tactical Combat Department from the developer LukasH. The developer was kind enough to provide a code to show off its gameplay to our readers and viewers. This game brings the realism of being in a SWAT team with the enjoyment of a turn-based strategy games like X-COM.

The game’s official Steam page describes it as following:

Tactical Combat Department is a tactical turn-based strategy game inspired by Swat games. You command a special intervention squad that intervenes in various situations and environments

So far, the game has garnered mostly positive reviews and is available now on Steam.

Lord Snalydo tried out multiple maps, but he wanted to give you a preview of his favorite one. You can check out our full impressions of the game in the video below. In addition, be sure to check out other first impressions by Lord Snalydo here.