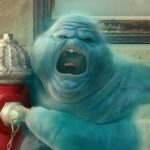 You are reading
Ghostbusters: Afterlife Scares its Way to the Top

This past weekend and after years of waiting, a new Ghostbusters film was released. While most critics didn’t like the fan-centric movie. Ghostbusters: Afterlife had no issues taking the top spot at the box office. Also, did you miss the new trailer for Spider-Man: No Way Home?

In its first weekend Ghostbusters: Afterlife was able to gross $44 million. That number should jump to over $65 million with the Thanksgiving holiday approaching. In fact fans can find the movie available to preorder on select digital stores. I bought the digital version this week off the Xbox Live store. No date on when this movie will be coming home. Internationally, this film is sitting at $16 million, bringing the total to $83 million worldwide.

Eternals continues to print money for Marvel. The critically-panned film is sitting at a $337 million worldwide, domething this movie shouldn’t have been able to do with all the negative critical reviews. Another Marvel movie that did have a digital release this week is still doing well. Venom: Let There Be Carnage grossed $2.9 million as it now sits at $455 million worldwide. It doesn’t look like this movie will be crossing the $500 million mark in theaters. Dune is so close to crossing that $100 million domestic mark. If the film wasn’t released on HBO Max, it may have happened. Yet, I don’t think more people would have had the chance to watch this amazing film. It now sits at $365 million worldwide.

Three movies will be released this weekend. All three of them have the power to take the top spot from Ghostbusters: Afterlife. Encanto, House of Gucci, and Resident Evil: Welcome to Raccoon City are all coming to a theater near you. Hopefully you can find some time to go out to the theater this weekend and enjoy one of these movies before they leave the theater.

Facebook Twitter Google+ LinkedIn Pinterest Tumblr
Previous article Everything You Need to Know About the Halo Infinite - Fracture: Tenrai Event
Next article Spiritfarer: A Game to be Thankful For