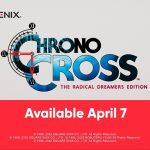 Today February 9th, 2022 Nintendo held a Direct to highlight the upcoming Nintendo Switch games. With the Direct comes the latest info of a remastered classic. We have a new trailer and new details on the upcoming Chrono Cross The Radical Dreamers Edition. A remaster of the original Chrono Cross title.

The remaster will release on April 7th, 2022. With that, you can now pre-order the game from the eShop. Chrono Cross was originally released for the PlayStation one in 2000. The Japanese Role-Playing game is set in the same universe as SNES classic Chrono Trigger.

With the remaster there will be a few changes to the game. Square-Enix is giving players the opportunity to turn off enemy encounters. In addition to an enhanced soundtrack. Finally, players will also receive Radical Dreamers, a text-based adventure that serves as the prequel to Chrono Cross. Radical Dreamers was released on the Super Famicom in 1996 and has not seen a US release.

Along with the Nintendo Switch, the Radical Dreamers Edition will release on PlayStation, and Xbox on April 7th, 2022. It appears no PC version of the game is announced.