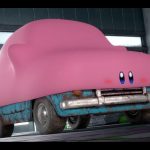 You are reading
Nintendo Direct: Kirby and the Forgotten Land Brings Mouthful Mode

Today February 9th, 2022 Nintendo held a Direct to highlight the upcoming Nintendo Switch games. Among them is the tentpole Spring title Kirby and the Forgotten Land. The Direct brings a new trailer and new details for the upcoming 3D Kirby game.

Mouthful Mode will have players absorbing large items in the open world area to make Kirby larger. While Nintendo makes it sound like a gameplay mode from the menu, it will be a gameplay mechanic within the game. Two examples from the trailer, Kirby can become a car and drive around the map. Along with another example of a vending machine that spits cans.

Kirby and the Forgotten Land launches worldwide on March 25th, 2022. Pre-loading from the eShop began in January. It will be the first 3D entry in the series. Nintendo hopes it can get the “Switch bump” that helped franchises like Animal Crossing and Mario Party.