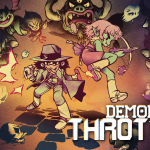 This summer Devolver Digital will release Demon Throttle on the Nintendo Switch in a physical-only format. That is correct: there is only one way to buy and play Demon Throttle, and it will not be released on the Nintendo eShop. This weekend at PAX East we had a chance to play through the entire game.

Demon Throttle is a vertical scrolling shoot-em-up that leans heavily on being funny. The game does not take itself too seriously, which gives the complete package more meaning. The game’s jovial elements and physical-only release are reminders that developer Doinksoft is in on the joke.

Despite the jokes, Demon Throttle is not just a 25-minute prank. Players looking for a complete game will find epic boss battles and a series of hidden rooms. These bring the game much closer to an hour. If you are successful in finding all of the hidden rooms, players will experience the game’s “good ending.” Yet do not forget this game is classic in every way, so if you die you do start over. Fortunately, hidden cheat codes for the game do exist.

Doinksoft is a small team from Oregon, just looking to deliver a fun time. While nobody knows what holds in the world of mass production, the game is complete and the team hopes to start shipping the game in July. For those looking to get a pre-order for this physical-only game, it can be purchased here.