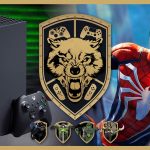 Welcome to another episode of The Iron Lord Podcast. The Roundtable is joined by Gamestop Senior Community Manager and former Xbox Product Marketing Manager Rukari Austin! The Lords discuss PlayStation games on PC and mobile; Xbox turning down Marvel exclusivity, and TCL leaking consoles. ILP 259 is in the books!

20:46 – @LordCognito is up with “Lordly Introductions” for this week’s special guest, former freelance host for #XBox and current Sr. Community Manager for #Gamestop, we have Lord Rukari Austin (@rukizzel) !

01:20:42 – Lord Rukari talks about his journey towards & within the game industry!

02:06:48- The Lords talk about #Sony’s recently discussed expansion plans for PC & Mobile! We also have some recorded comments from the vacationing Lord @KingDavidOTW !

02:37:06 – The Lords talk about the recent revelation by #MarvelGames that #Xbox originally passed on an exclusivity deal with them!

02:58:28 – The Lords give their thoughts on a recent press conference where #TCL released a timeline predicting a new #XboxSeries & #PS5Pro model within the next two years!