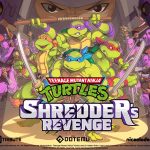 You are reading
Teenage Mutant Ninja Turtles: Shredder’s Revenge A Review In A Half Shell

In 1984, the original Teenage Mutant Ninja Turtles comic book was launched. To accompany the book, its series creators opted to license out the characters as children’s toys and a cartoon. Over the next decade, TMNT transmedia would push the franchise to a juncture among the world’s most popular intellectual properties. Most notably, the Saturday morning cartoon would become one of the most successful and iconic animated series of all time. Fast forward nearly 35 years later, developer Tribute Games and publisher Dotemu have sent a time capsule in the form of Teenage Mutant Ninja Turtles: Shredder’s Revenge.

Teenage Mutant Ninja Turtles: Shredder’s Revenge is an homage to both the animated series and the subsequent 1990’s arcade games that followed. Video games like The Manhattan Project and Turtles in Time shaped millions of young minds. With Shredder’s Revenge, we get a brand new game, developed with modern technology, while still including elements we loved from the classic titles.

This time around we have a fairly unique art style. There is a pixelated take on the 1987 animated series that absolutely shines. The level design choice to stay out of the sewers (mostly) and in the city makes for a bright and colorful game. They have perfectly nailed the 1987 animated series look within an arcade setting all while in modern HD. This spring when we sat down with the developers, one of them told me, “we have the best pixel artists in the world.” At the time I thought that was a fairly unfounded claim. It is not like there are yearly pixel art competitions where a champion is crowned right? Having now played through Shredder’s Revenge, I have to take the team’s word for it. 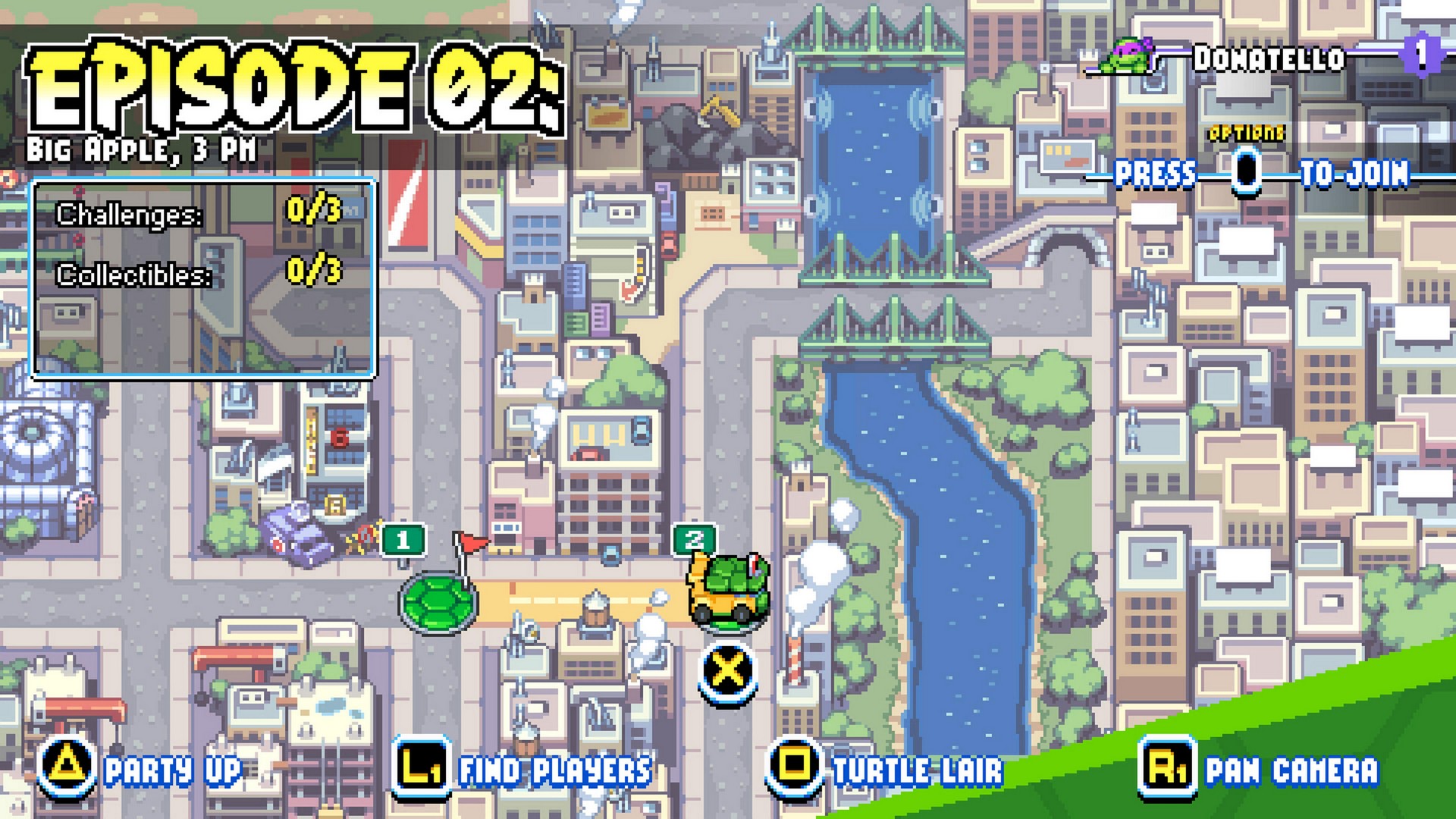 The nucleus of Shredder’s Revenge is a six-player co-op classic arcade-style brawler. There is support for couch co-op or online play. Along with having no shortage of players as there are seven to choose from. Shredder’s Revenge is a fantastic party game or if you just want to kill some time with friends. Just do not expect to play with any strangers, as the game does not currently have working matchmaking. We assume matchmaking with be working at launch. Outside of that, playing online with friends was without issue. Plus cross-play is only supported between Xbox and PC. Also, PlayStation only supports up to 4 players locally.

Once you get started, you will visit 16 unique areas from the animated series via a hub world. Areas like the News Station where April O’Neil works, and Coney Island. Much like the rest of the game, the 1987 animated series is the source material. Clearly, the team was passionate about what they were doing here as they nailed the look and feel. You will battle your way through locked side-scrolling 2D maps fighting waves of traditional TMNT enemies.

You will face off against baddies like the Foot Soldiers, Triceraton Warriors, and the Rock Troop. There is a nice mix of bad guys in each level. It feels like, with every new level, one or two new enemies are introduced. As you progress toward the end their mix of different attacks increases the game’s level of difficulty in a way that feels natural and perfectly paced. 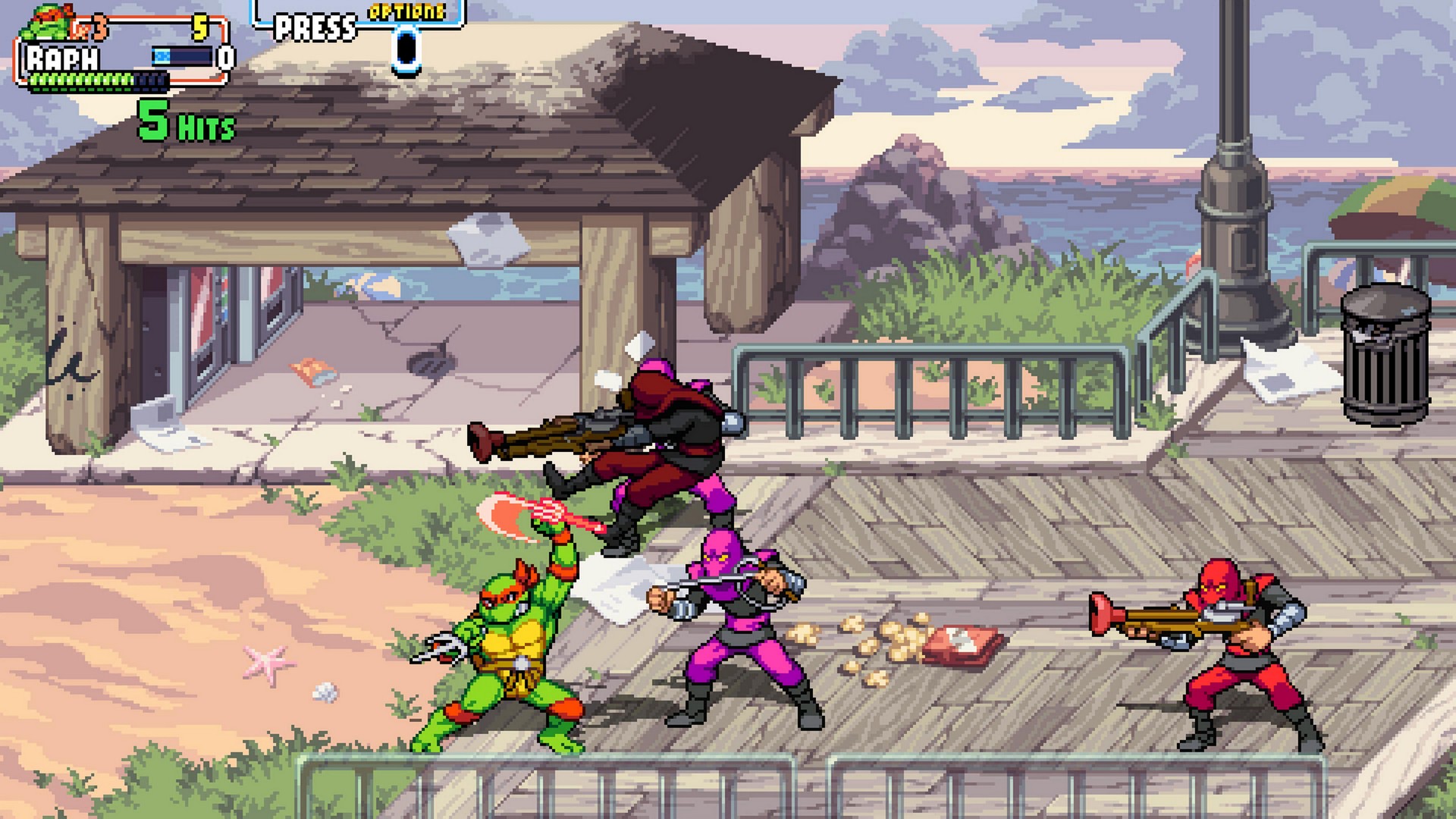 Navigating through the waves of enemies will take you roughly 10 minutes per level. Once you reach the end you will be greeted by a villain from the animated series. With that about of varied content, you get that sense of, “everybody is here.” Nearly every character I could conder up from my memory is present in some way in this game.

The combat feels sensational. There are over 20 combinations of offensive and defensive moves. By taping the left face button you can perform a basic attack, which can be chained together to form a combo or to juggle the Foot Clain in the air. Once you have built up a special meter, the top face button blends in a special attack.

These special attacks feel like hyper combos from fighting games that fill up large portions of the screen. If you are concerned about the button layout, that is entirely customizable. The controls feel great. You can become an expert and learn slide attacks and combos, just as well as you can get away with button mashing and dodging. Shredder’s Revenge is a very approachable game for all types of players.

While playing I found striking enemies in the air to be frustratingly difficult. Yet, that is more a problem with the genre than it is with the game. The 2D brawlers have always been a nightmare to traverse three dimensions while attacking. I had a very hard time attacking the flying enemies in the game and unfortunately, there are two bosses with flying mechanics. 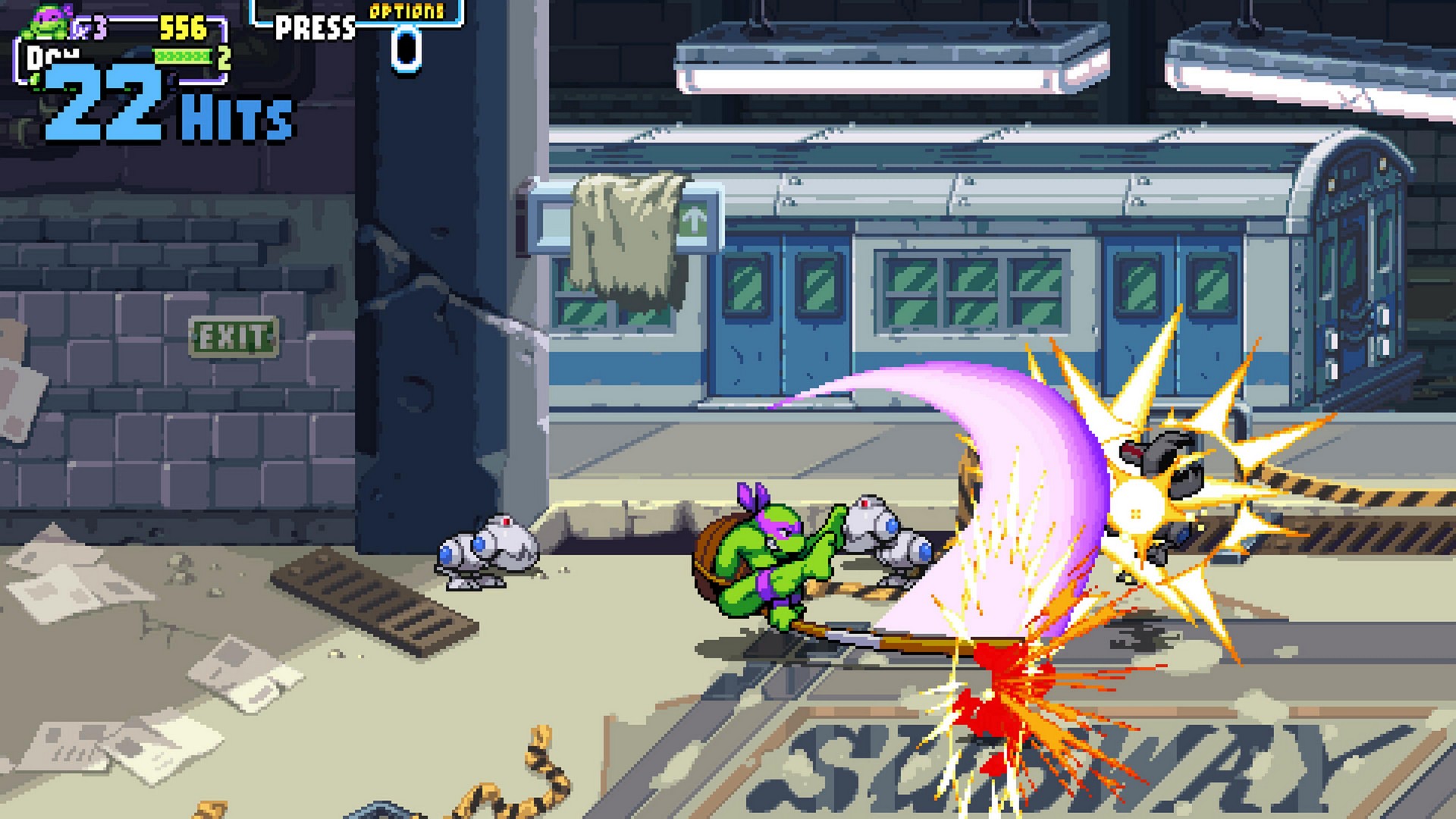 With that said, on the normal difficulty Shredder’s Revenge is a fairly easy game. It is not as challenging as the classic arcade games. Stepping up to an old TMNT cabinet feels like the stakes are higher than what we have here. The Old Turtles games were short, much like any other NES or arcade-era title, but when you lost all of your lives, you started over. This is a common method used to extend the length of smaller games. With Shredder’s Revenge that pressure is gone, but the stakes are not as high.

Although the team has made up for it by creating a slightly longer game at nearly three hours of playtime. Along with introducing replayability elements like collectibles and secrets to each level. Collectables like VHS tapes and hidden NPCs can be found. The main menu has a “library” to look back at how far you have come in the game. Yet there is not much to look at, as nothing is on display, and it is an NES-style text and sprite menu. It would have been nice to see the items on display in a room. Likewise, the collectible menu is missing bios and images of the enemies.

Teenage Mutant Ninja Turtles: Shredder’s Revenge at its core is both a fantastic brawler and a TMNT homage. Both completionists and hardcore fans of the series will have no problem playing levels two or three times to find all of the secrets and collectibles. It is OK that the game is only three hours long because of the replayability. Not to mention how perfect the game could be at any party with its 6 player co-op. At the price point, there is nothing wrong with the three-hour playtime, which is above the standard for this genre. 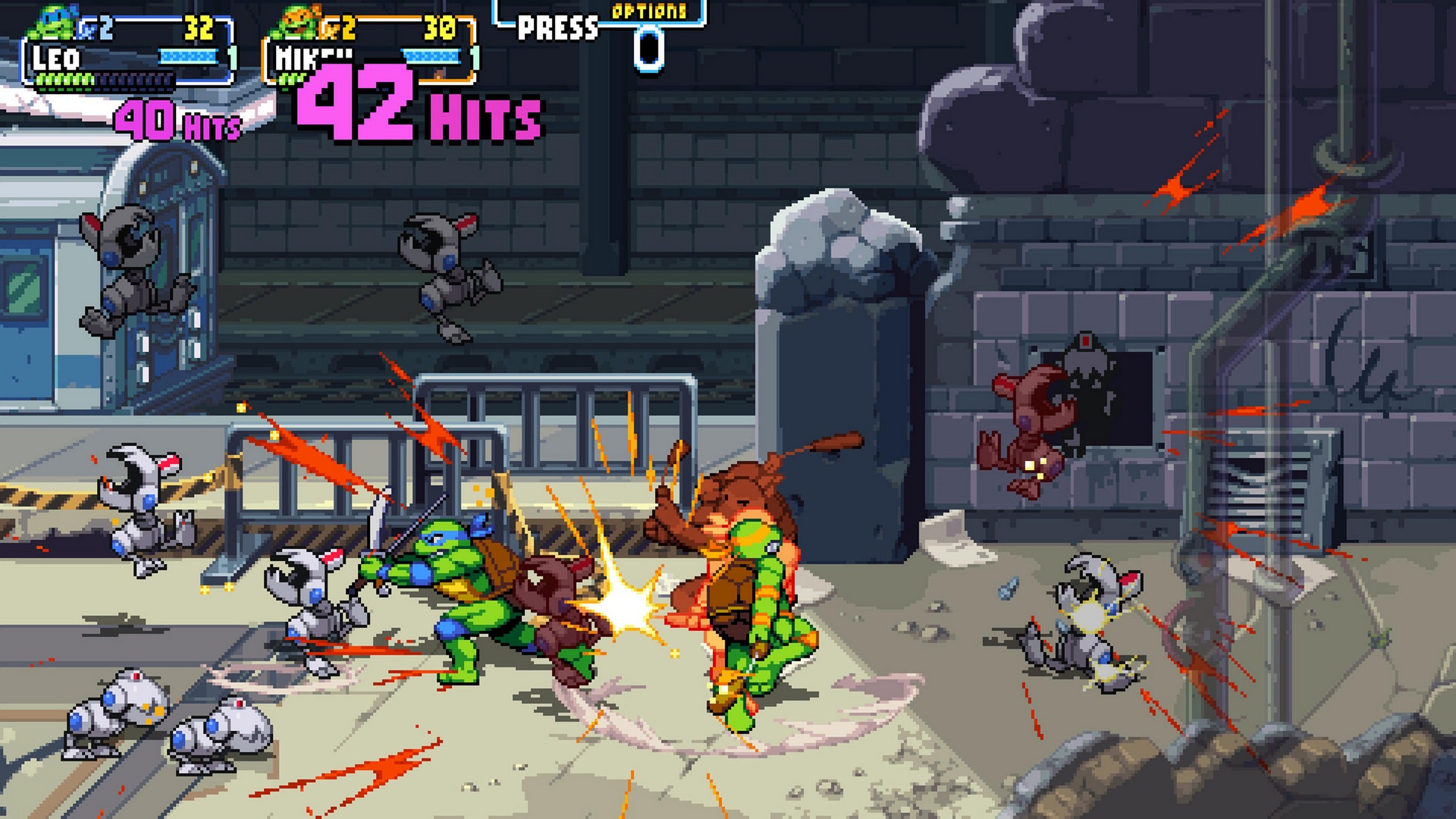 The audio design in Shredder’s Revenge is a work of art. The combat effects perfectly blend with the classic 80s-era arcade tunes. It’s not quite Chip-Tune but it is not modern either. They have captured the sound and environment from an arcade game of that era that goes above and beyond. Along with that, they have included two absolute bangers in the soundtrack.

I don’t want to ruin the surprise but there is a song featuring members of the Wu-Tang Clan rapping about the turtles. Then there is a flying level with an ’80s-inspired hair-metal, pop-rock song. I think when we look back on the best music tracks of the year, both have to be included. These are iconic moments in the game and if I go into any more detail I would be robbing you of these amazing moments.

Teenage Mutant Ninja Turtles: Shredder’s Revenge is not just the best TMNT game in the past 30 years, it is one of the 10 best games released in 2022. I would rank it among the best 2D brawlers in recent history. The only things that I could possibly ask for are better matchmaking, a full collectibles library, and a sequel.