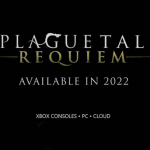 There is a wealth of new game reveals and details that have been announced during today’s Xbox Game Showcase. One of the most anticipated upcoming AAA games is coming from Asobo Studios. The sequel to the beloved Plague Tale: Innocence, Plague Tale Requiem looks to build on the dark and frightening world established in the previous game. With more focus on stealth-based combat, and unique powers. The game is set to release on PlayStation, Xbox, and PC later in 2022.

Are you excited for Plague Tale: Requiem? Let us know in the comments and don’t forget to check back for the latest gaming news and information.