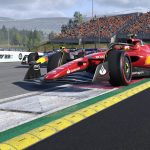 You are reading
F1 22 Review – Pole Position Not Guaranteed

F1 22 is the latest offering in the racing franchise from long-time developer Codemasters. Reviewing games which have yearly releases such as the F1 series can be difficult. Fans have certain expectations, and if they are not met, the game is often berated. Developers are incentivized by PR and the community to try new flashy changes. Meanwhile, some changes occur under the hood that are not easy to notice at first. F1 22 provides a little of both. It maintains its strong driving and presentation foundations with some superficial new features sprinkled on top. 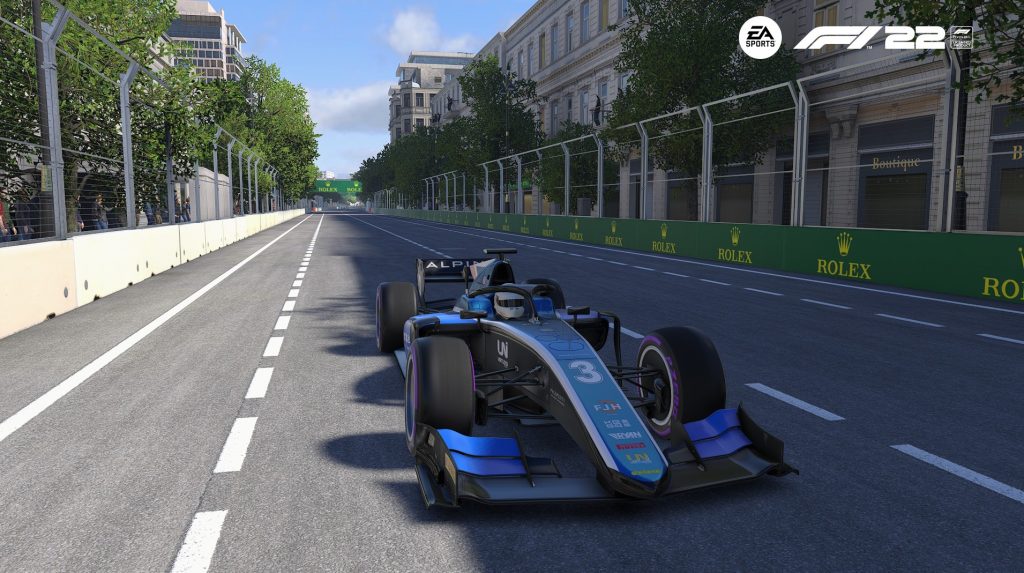 F1 22’s driving experience is deeply satisfying and highly customizable to suit your experience level and personal taste. The game offers a wide range of options. From cars that pretty much drive themselves, to experiencing the wildness of braving a full-scale Formula 1 car. The options are there for you to tinker with.

Out of the box, I was immediately impressed with the handling models on the cars. Speeding into corners and barely missing barriers and other cars was a joy to experience. I decided to crank down some of the assists the game left on for me to really get more control of the vehicle. And every time I did so, I had to adapt my driving style. Once I found that sweet spot, I did not feel compelled to change it, as the overall driving experience was satisfying. Though the option of changing it up remains if you choose to do so.

F1 22 also delivers on the sense of speed, which can be a difficult feat for some racing games. Track surroundings blur together, vibration in the car intensifies, and you can hear the engine roaring. Though on longer stretches of a track, it might feel like you’re just cruising. But looking at the speedometer, you realize the car is actually traveling near 300 km/h (186 mph). Approaching a turn after traveling at that speed, you quickly realize and appreciate the braking force required to reign in an F1 car.

One of the new things Codemasters improved this year is the AI in F1 22. Let’s not beat around the bush, the AI racers are punchy and aggressive. I was actually shocked at some of the maneuvers they would pull during races. AI racers will gladly nudge you to try to get you to spin out of control and will try to overtake you at any given opportunity. If it is too much for you, players can tweak the AI aggression to their liking. It was truly refreshing and sets the race battle vibes wonderfully. Throw in some dynamic weather into the mix, and it is an exhilarating racing experience in F1 22. Rain will take its toll if you have not properly tuned your vehicle and your garage will constantly remind you if you are in accordance with FIA’s strict rulesets. But again, this adds to the overall immersion of the game. 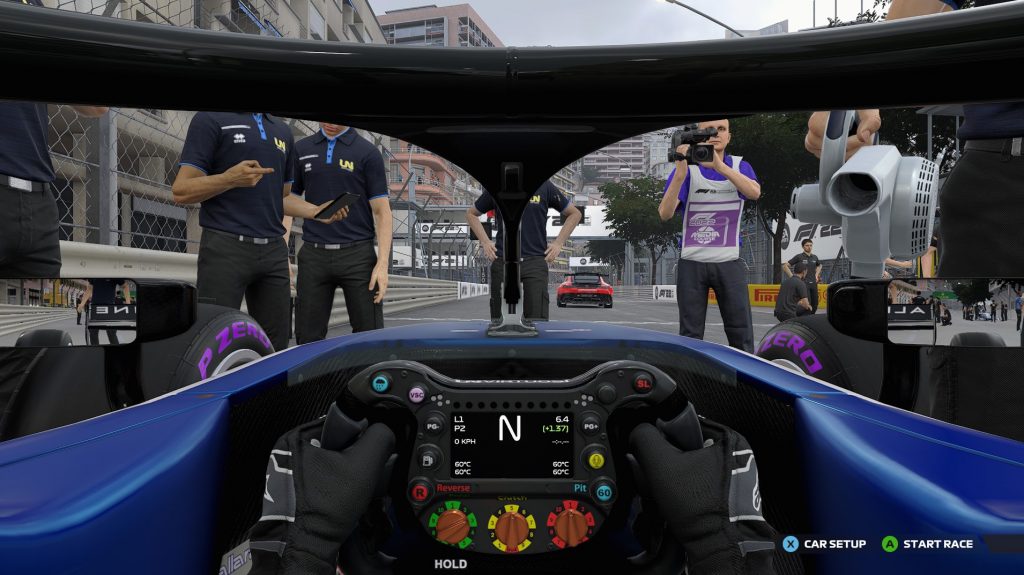 F1 22 continues the franchise’s strong pedigree in presentation. From the broadcast to the on-track pre-race preparations you would be hard-pressed to tell the difference between the game’s slick presentation from its real-life counterpart. It adds to the game’s immersion and puts you at the wheel of your favorite driver and team. The game features:

As expected, the game also features both the latest 2022 F1 car model and track layout changes (more on that below). Players can select between realistic or equal performance options for F1 cars, where the former option will reflect the team’s real-life car performance. 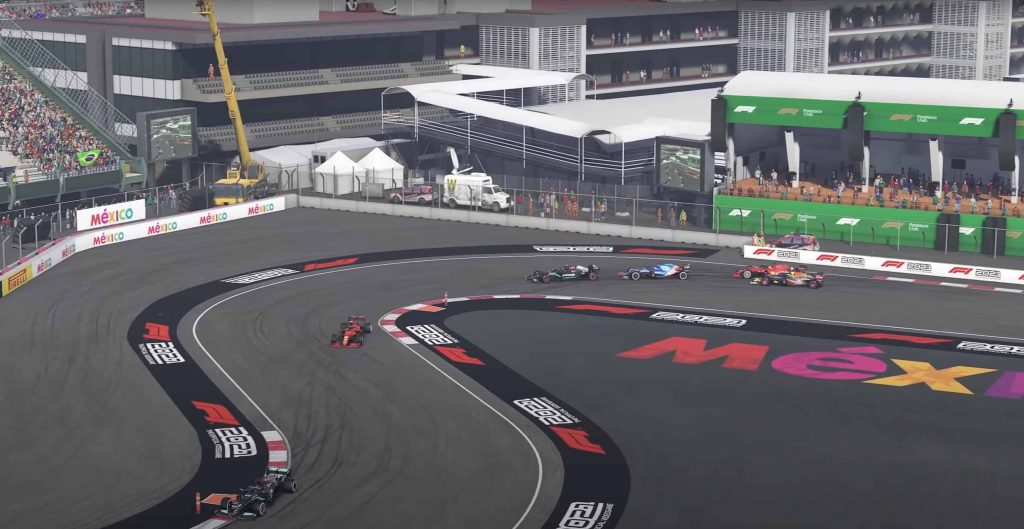 F1 22 sees some modest but welcomed changes in its track listing. The game sports 22 circuits, including the debut of the highly anticipated Miami Autodrome circuit. This year’s version also introduced new track layouts for the Barcelona, Melbourne, and Abu Dhabi circuits. The last two tracks, in particular, improved the circuits drastically, as they were previously uninspiring layouts that focused more on caution, with fewer overtaking opportunities available. Though fans were annoyed that these track layout changes were not included in last year’s offering, they do make their way in 2022’s iteration.

F1 22 maintains its graphical standard from previous games, but it is starting to look worn out. The in-game circuits do a good job replicating their real-life variants, but zoomed-out shots are not flattering at all, and have a polygonal look to them, especially high rises and other landscapes. The cars look great and the drivers’ faces are authentically replicated, though the game struggles mightily to produce eyes that are anything but creepy.

Character models other than the main drivers look off and are given second-class NPC treatment in terms of both graphics and janky animations. Despite this, the graphics are decent and complement the visual presentation of Formula 1. However, at this stage, the graphics could use an overhaul hopefully sooner than later because it is losing glimmer with each iteration.

F1 22 features an impressive array of tech that will boost performance to your liking, something that I appreciate. F1 22 came with DLSS 2.0 and FSR 1.0 out of the box. Having an AMD card (5700 XT), FSR was the only upscaler option available to me (yes RSR is also available, but that is on a system level), but it performed admirably.

On the Quality Mode FSR setting, my frames jumped up to well above 160 FPS, without sacrificing image quality as well. I could have pushed the frames more, but with a 144 Hz display, that would have been overkill for little benefit.

DLSS is also supposed to perform amazingly as well. This is no surprise since F1 titles are regularly used for benchmarks so it is nice to see that the game provides the full suite of upscaler tech. The game also provides VR support and Ray Tracing, but unfortunately, I was unable to dabble in these features. On the audio front, F1 22 is also in pole position.

F1 22 delivers superbly in both audio design and an enjoyable soundtrack to match. Driving around a track is an immersive experience and part of that is due to the game’s excellent audio design. The cars roar and evoke a sense of risk, speed, and battle. All of the audio cues are beautifully, and more importantly, authentically replicated. Hitting a curb generates a dragging thud while dinging into other cars is gut-wrenching with an audio cue to match. Moreover, the random noises in garages and corporate offices add brilliantly to the ambiance as well.

The soundtrack comprises slick tracks that evoke the feeling of a fast and dare I say cool lifestyle. It is pretty much what you expect when you play any annual sports title. It does the job and sets the mood and atmosphere for the rest of the offerings found in F1 22.

Plenty of Modes to Keep You Busy in F1 22 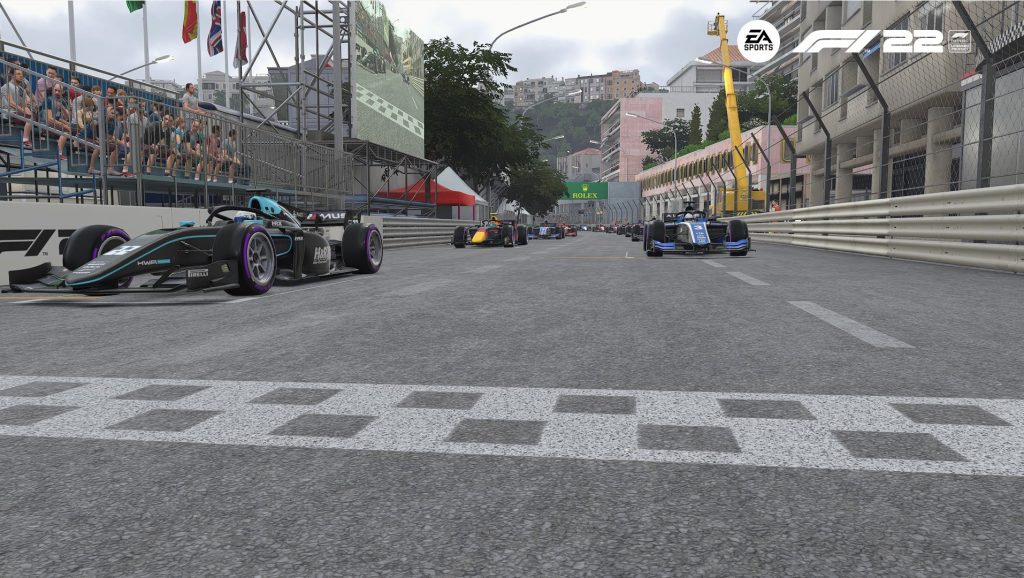 F1 22 has plenty to offer to keep you busy, though your mileage may vary when it comes to enjoyment. The ‘My Driver’ allows you to customize your own character (albeit with predefined faces) and start off in F2 and work your way up to the big leagues. Co-op is also available where player two will be your teammate.

‘My Team’ returns and offers you a chance to become an owner, team’s principal, and driver all in one. You can select different scenarios for your team when you set it up (such as newcomer, mid-table team, or defending champion). Along the journey, you will engage in interviews, and depending on your responses, this might impact your relationship with the different departments of the team (such as durability, and aerodynamics).

Race practices offer challenges for your car’s R&D and impact its upgrade costs, which incentivizes you to hit the track with a purpose. All-in-all, ‘My Team’ was my favorite mode and it is a rewarding, but very much a long-term, experience. Overall, F1 22 provides the most content-pack F1 offering that will keep both vets and newcomers busy. However, not all the content lived up to expectations. 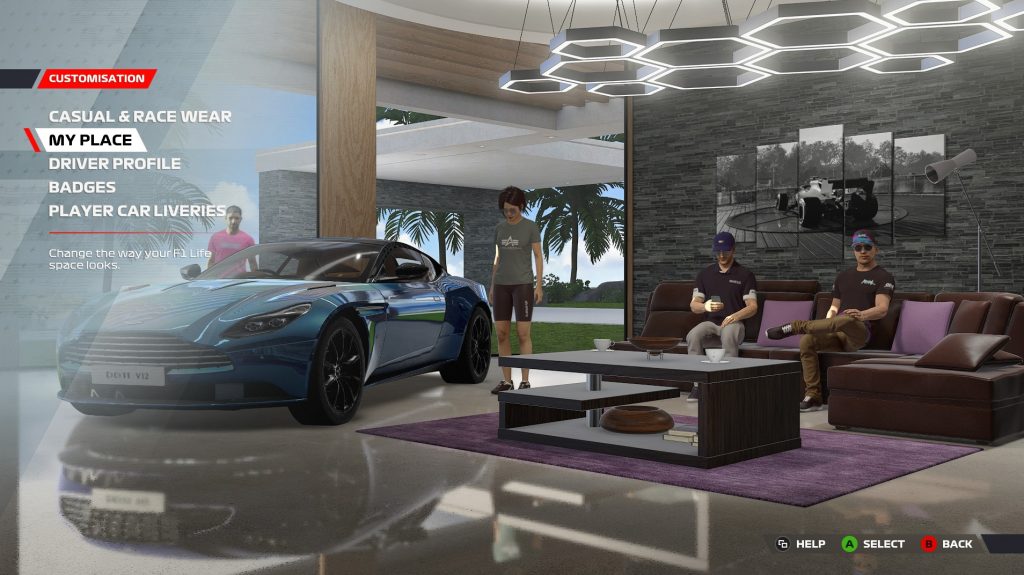 While F1 22 provides under-the-hood improvements, its more explicit new features are lackluster. The most apparent of these new features is the F1 Life. It is a hangout area where players can unlock cosmetics, furniture, and supercars and show off their goods. Other real-life players can visit your F1 Life space. In other words, it is F1 22’s take on The Sims. While it does add swag to unlock in the podium pass, F1 Life is redundant and forgettable.

Players can test out the supercars in a series of challenges known as the “Pirelli Hot Tracks”. There is a total of 40 challenges, so plenty to keep you busy with, While it is a change of pace driving around in a McLaren or an Aston Martin, especially since they clearly handle so differently from F1 cars, I couldn’t wait to jump back in the cockpit of an F1 car. The Hot Tracks is a nice addition that offers a distraction from the main game. While it seems that the F1 Life mode and the things surrounding it are just there to iterate from last year’s offering more so than to add anything substantive.

F1 22 has a lot of under-the-hood improvements that might not be obvious at first. Driving remains satisfying, engaging, and adaptable. While the AI is aggressive, it will likely add to your race experience. The game’s presentation remains impeccable and truly reflects authentic F1 coverage. There’s a ton of content to enjoy that will satiate F1 and racing fans. But its aging graphics and a lackluster F1 Life show that an overhaul is overdue.

F1 22 is available now on Steam, PlayStation, and Xbox platforms.

*Note – The PC version was tested and the publisher provided a review key for this review.