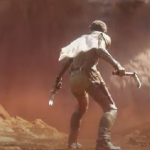 Gamescom 2022 opening night live is an event packed with new trailers, information, and release dates from the biggest upcoming games. From big AAAs to impressive Indie titles, there is almost something for everyone at Gamescom 2022. One of the biggest surprises of the show this year has been the reveal of Dune: Awakening by Funcom.

Details on the New Dune Game

This new game will be an all-new open-world survival MMO game set on Arrakis. The only confirmed platform so this game so far is Steam.

However, the only details we have are as follows from the games site:

Dune: Awakening combines the grittiness and creativity of survival games with the social interactivity of large-scale, persistent multiplayer games to create a unique and ambitious Open World Survival MMO. Rise from survival to dominance in a vast and seamless Arrakis shared by thousands of players.