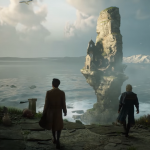 You are reading
Hogwarts Legacy Receives New Trailer At Gamescom

Gamescom 2022 opening night live is an event packed with new trailers, information, and release dates from the biggest upcoming games. From big AAAs to impressive Indie titles, there is almost something for everyone at Gamescom 2022. Avalanche Software showcased the upcoming Hogwarts Legacy with an all-new trailer.

After the announcement of the delay of Hogwarts Legacy from its Holiday 2022 window into the Spring of 2023. There was some concern about the state of the game, as what we have seen so far has been rather limited. With the massive world that was built in the Harry Potter universe through its novels and movies. Fan excitement for this game is through the roof and this new trailer showcases just about everything you want to see in a magical wizarding RPG adventure.

Hogwarts Legacy is releasing on PlayStation 5, PlayStation 4, Xbox Series, Xbox One, and PC on February 10th, 2023. There is currently no information about whether there will be a collectors edition at the moment. Hopefully, we will learn more in the months leading up to the launch.

Will you be traveling into the magical world of Harry Potter? Let us know in the comments and don’t forget to check back for the latest gaming news and information.