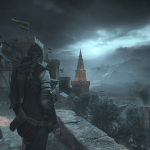 You are reading
A Plague Tale: Requiem Review – Chasing Dreams

A Plague Tale: Requiem is a stealth-based action-adventure game developed by Asobo Studio. When A Plague Tale: Innocence launched in 2019, it was one of the biggest surprises of that year. Very few expectations were placed on the title since it was new. Despite it having a lot to prove. Now that the series has been established its sequel can either hit or miss the expected quality. However, I think that despite meeting and exceeding my expectations from its predecessor’s quality in many scenarios, there are sadly some big missteps in the game overall.

A Plague Tale: Requiem takes place a little under a year after Innocence. You play as Amicia, leading Hugo around with their mother Beatrice, and their friend, Lucas. When the rats return following an incident, it is up to Amicia to find a cure for Hugo’s illness to stop the plague once and for all.

However, it is not that simple. Hugo keeps dreaming of an island that can cure him and no one except for Amicia will believe him. Between everyone’s disbelief, a militaristic force, and the rats thwarting progress, Amicia becomes a force to be reckoned with to find out if she can make Hugo’s dream come true. 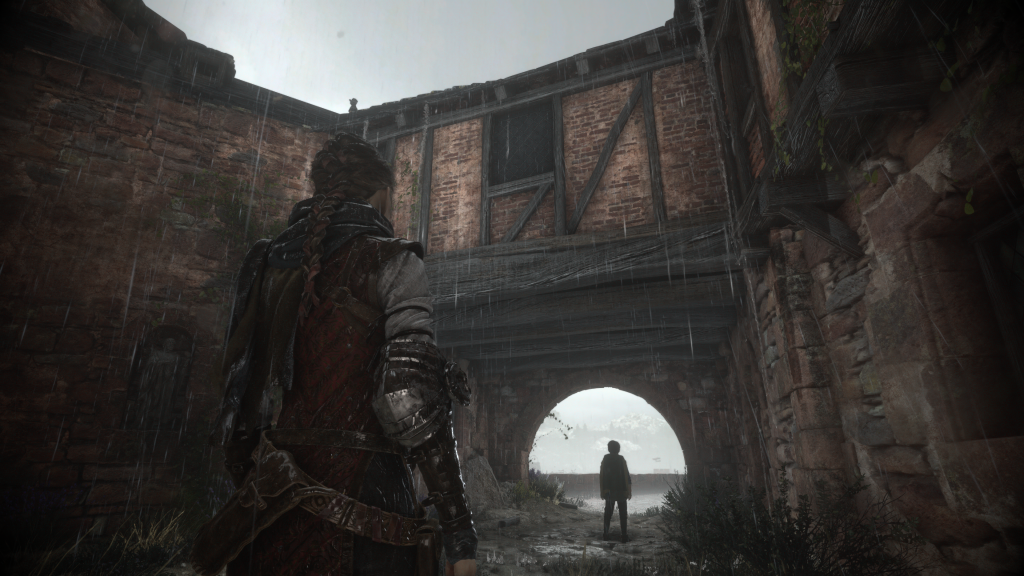 In Innocence, they hid in the face of fear. While in Requiem, they became the fear. As Amicia faces soldiers head-on in multiple scenarios despite those being very bad decisions. For example, in the early game, Amicia holds out in a barn constantly taking down soldiers disregarding Lucas warning her to run away and leading them to be captured. Amicia had so little time to process the trauma in the original game. Yet,  in various moments of Requiem, you can see her showing her new trauma by staring blankly into fires and hearing the screams of those she hurts.

The character dynamics and progression for her and Hugo continue to be the heart and soul of the story. There are moments of warmth, stillness, and terror perfectly paced and blended together that kept me hooked. With lovingly written dialogue that made me tear up or chuckle at times. The story for Requiem is nothing but a direct upgrade over Innocence and has a conclusion I will never forget.

A Plague Tale: Requiem still has the normal stealth gameplay of Innocence. Using Amicia’s mighty sling and alchemical compounds to fight off humans and rats alike. Hiding behind walls and in tall grass, having to take your time getting from one place to another. But there are some improvements to the core stealth systems. You can hide under tables, and throw rocks and alchemical compounds without the use of your sling. As well as being able to distract enemies in the last second before they find you fully by throwing a rock. 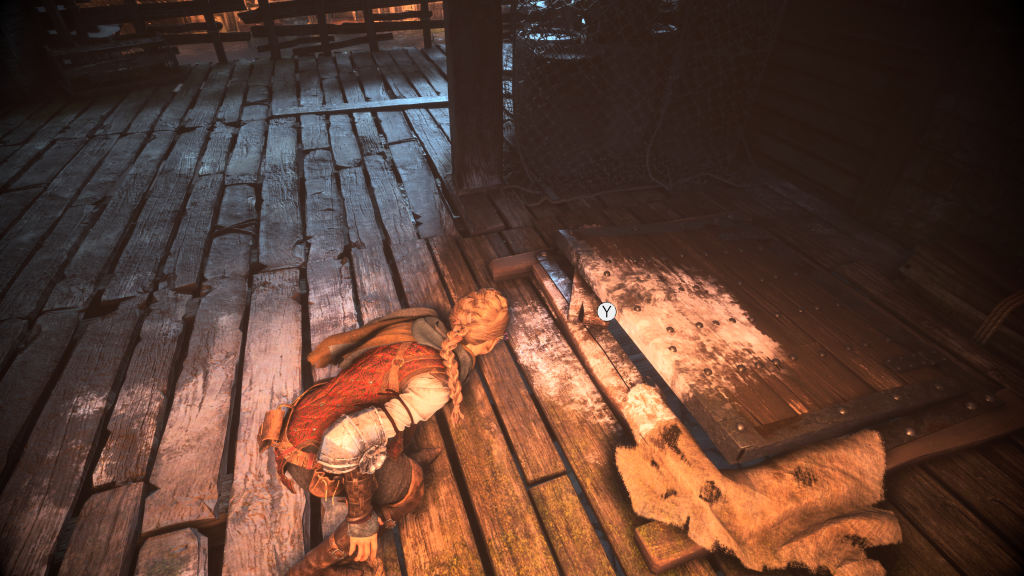 However, Amicia now knows how to fight more efficiently against enemies. She can now stun enemies by hitting them with the sling itself if they get too close, giving her a few seconds to avoid a confrontation. There are knives you can obtain to stab and kill an enemy if they are giving you too much trouble. You can now fill pots with any alchemical compound and use it as a strategic weapon. As well as having a crossbow that can kill most enemies in one shot.

But despite all of these improvements, there are some missing items from Innocence. Like the “Somnum” which knocks an enemy out. As well as the “Devorantis” the helmet-melting projectile just not being available anymore. Making a lot of the enemy encounters more difficult to navigate. To add, you can only hold so few crossbow belts, and being able to use a pot to put tar on an area and then light it on fire to kill someone is extremely limited. 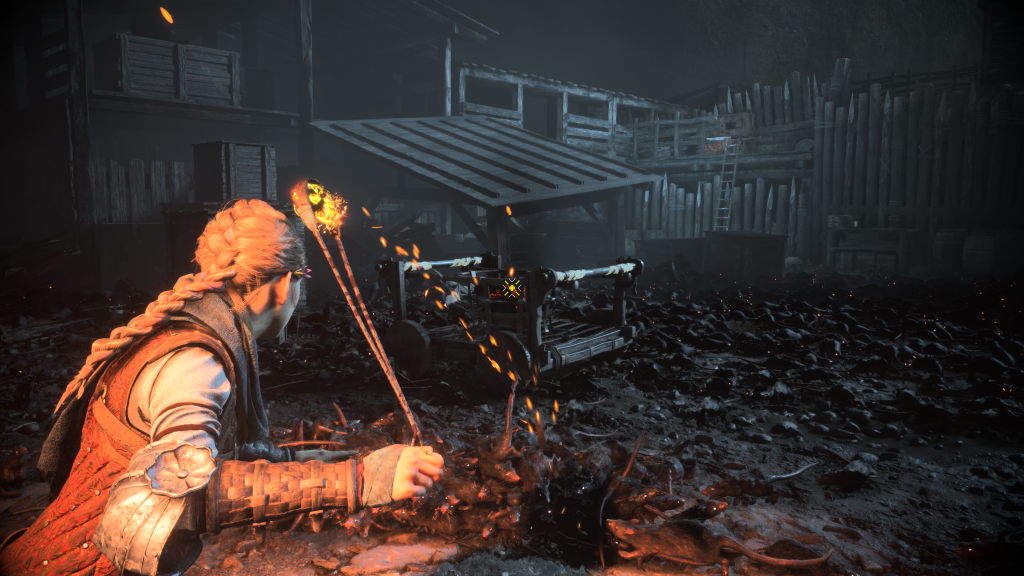 There are many steps forward, but a few steps back. I really missed the Devorantis and wish I could learn it due to the sheer amount of enemies who wear helmets in the game. But despite this, I thoroughly enjoyed all of the additions, especially the crossbow which was easy to aim and satisfying to fire.

In Innocence, the upgrades you could acquire for Amicia were very straightforward. Find upgrade tools and certain materials to upgrade various parts of her equipment. This is very different in Requiem. There are three skill trees that offer unique passive upgrades the more you play in a certain style. If you are more focused on stealth you can gain upgrades that increase your movement speed while crouched. While every other upgrade was just as useful, with a few such as breaking down spare materials never felt noticeable. 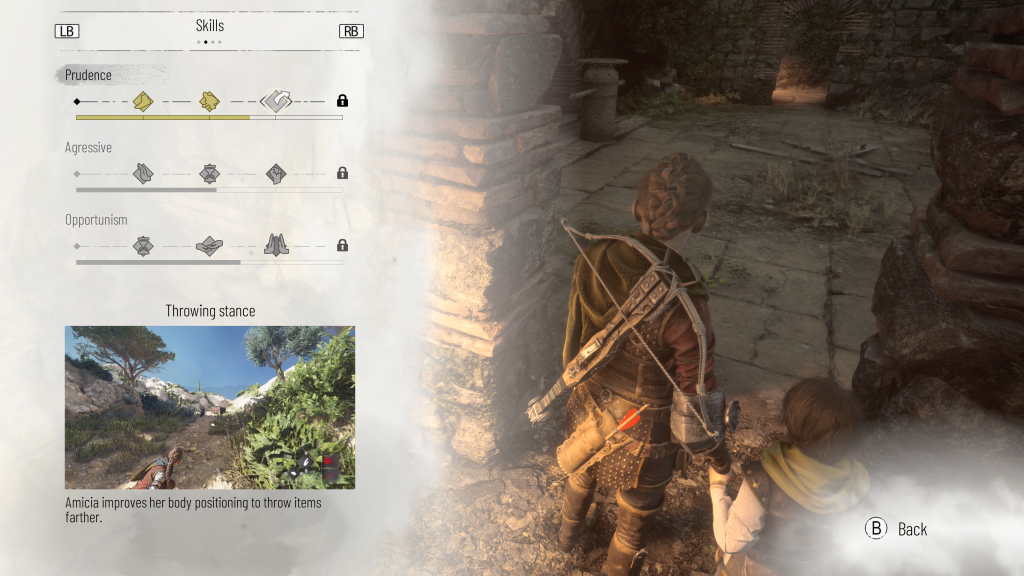 While workbenches still function the same. They no longer require a multitude of different materials. Just one and the upgrade tools required. However, upgrade tools and these materials are few and far between in select chests. The upgrades are still meaningful but require a lot more work to acquire all of them. However, the game does feature a new game+ mode that does carry over progress so you can unlock everything over multiple playthroughs. 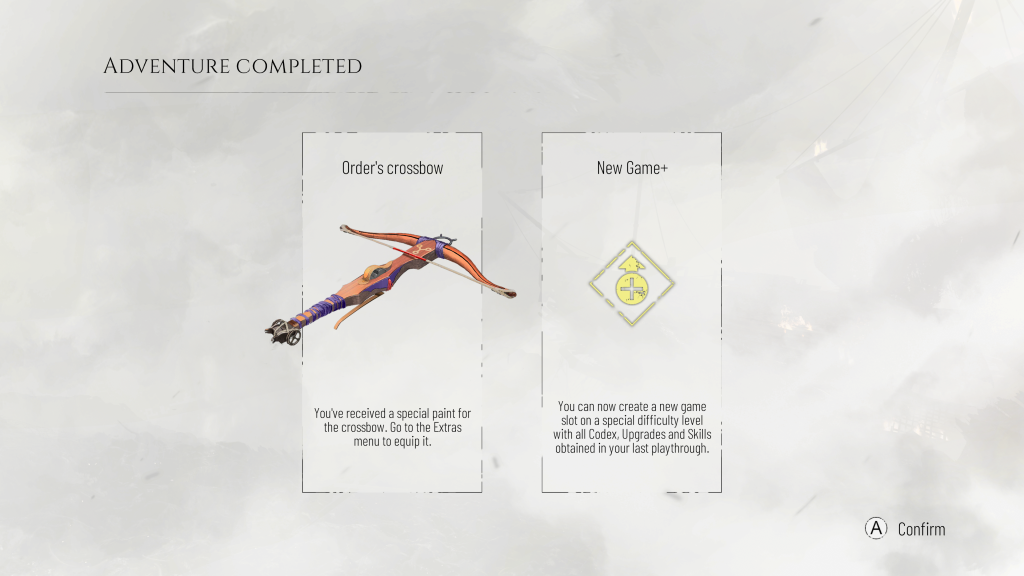 I don’t like this change in the upgrade system since a lot of the chests that contain upgrade tools and materials are hidden in certain stealth sections. While this was the case in Innocence as well, you had more tools to take down most enemies quickly to acquire the tools and materials. I would have preferred more tools at my disposal due to the impact some upgrades can have like being able to pick up crossbow bolts you fired to continue using them.

In between the normal gameplay and story moments are new and heavily improved puzzles and chase sequences. Navigating the rats in the original game was pretty easy. But in A Plague Tale: Requiem there are multiple moving parts to get across certain segments.

One that comes to mind instantly is having to light a bale of hay on fire after letting go of the lever that keeps it in place. Then run to an edge that will only be illuminated for a few seconds by that bale of hay. The puzzles are more precise and kept me fully engaged as one small error would restart the section fully. 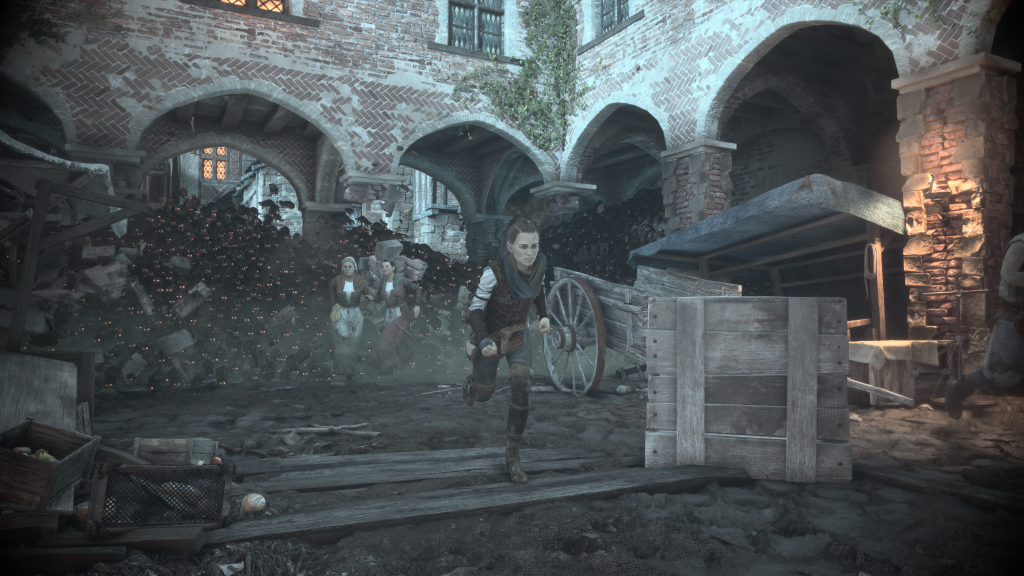 The chase sequences in Innocence felt inconsequential but in Requiem are intense as floods of rats crumble buildings, and devour humans caught in the wave. All the while the camera sometimes fixes itself in front of Amicia to create a sense of urgency. There is also a segment where you are on a boat and have to use a crossbow turret to kill archers firing at you. It was incredibly fun and a major highlight of Requiem. 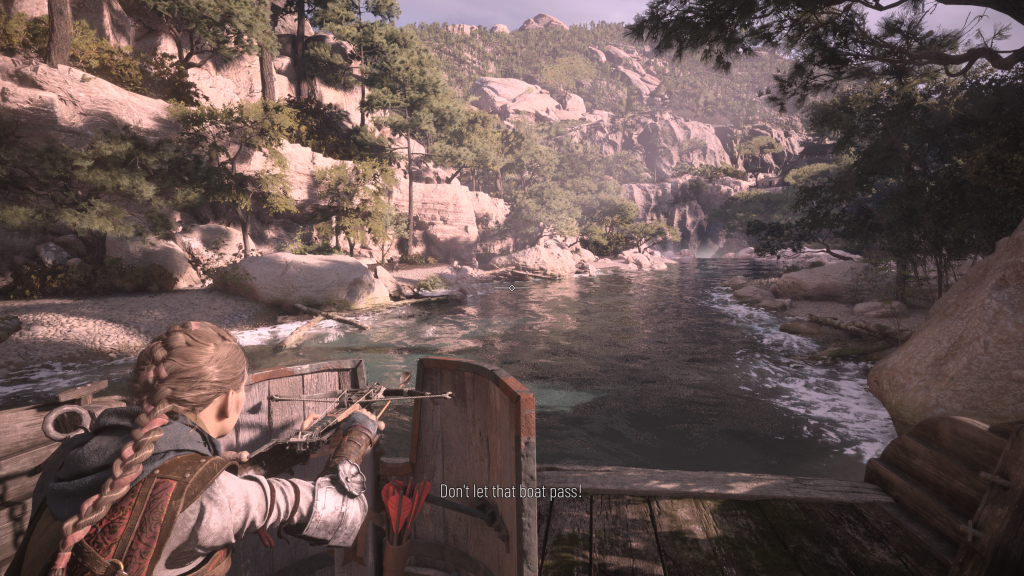 However, some stealth sections and combat scenarios can be a little too much. One combat scenario happened in a thick fog that required me to think on my feet and eliminate waves of foes that all had unique mechanics to them. It was extremely frustrating and tempted me to either knock down the difficulty or turn on the game’s “invincibility” mode. I pushed through it but felt a lot of the sections were very unbalanced as a result. Making them not as fun as they should have been.

A Plague Tale: Requiem is one of the best-looking and feeling games I have played all year. However, the game suffers from rough performance and inconsistent mechanics. For starters, I played on the Xbox Series X and the game’s performance could range from silky smooth, choppy framerates in some areas. Then, the performance takes a complete nose dive and becomes a slideshow in the weirdest of places. I was running away from an enemy and lit a brazier on fire and the game’s framerate dropped considerably despite not a lot happening on screen. 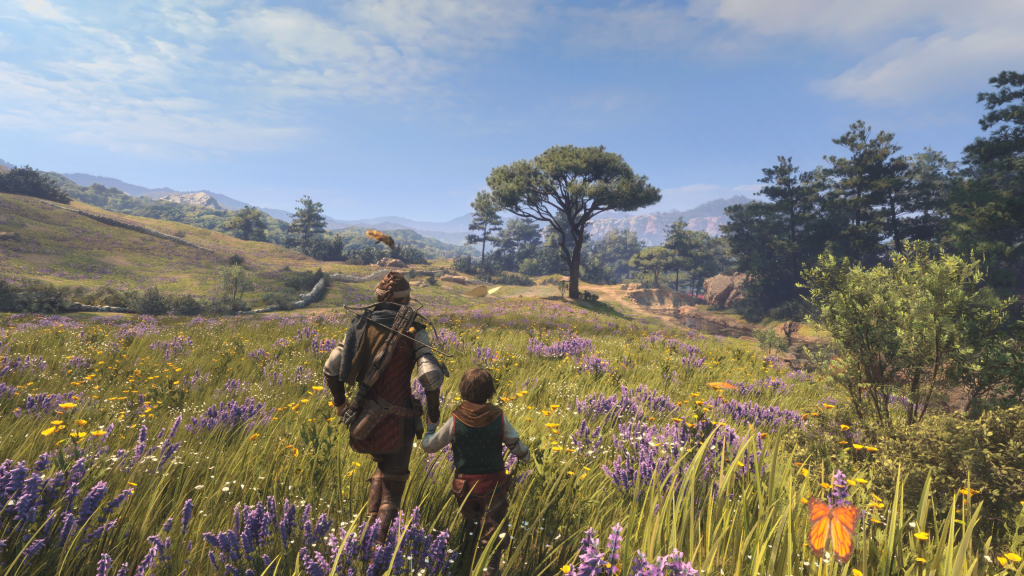 Some moments where cutscenes would focus on a character’s face would tank in performance as well. Weirdly enough, the game would not suffer as much in performance when using Hugo’s scanning ability. Even when there would be thousands of rats highlighted as a result. Not to mention that for some enemies you could stun, the prompt to do so would not activate properly at times. But despite these issues, there is an amazing soundtrack that captures every scenario.

The core of a great stealth game is its audio design and Plague Tale: Requiem excels in it like its predecessor. From the very beginning where you are just having fun with Hugo and shifting to a very dangerous area. There is an oppressive shift in the tone of the game as you enter that area.

Couple this with being able to hear enemies’ footsteps around walls and their armor clanging together and it helps perfect the feel of the game. Especially if you play it in “Immersive” mode as I did. Which strips UI elements to the bare minimum to make you rely on that hard work. I welcomed the challenge and would not have played it any other way.

The music also does a fantastic job fitting in every scenario possible, like the very soft usage of violins in a calm setting but it does not end there. In one very intense scene at the beginning of the game, there is an intense track that uplifts the fear factor of running through a field with many enemies chasing you while fire is flooding the fields around you and is unlike anything else I have heard in any soundtrack all year.

A Plague Tale: Requiem is in a lot of ways a massive improvement over Innocence. But the lack of a few alchemical compounds and the changes in the upgrade system felt like steps backward. Especially in comparison to the leaps in quality made in the game’s graphical fidelity. As well as the game’s story is more intense and meaningful than the original. However, none of the cons including the game’s rough performance can prevent me from recommending its incredible journey. Especially for fans of Innocence.

A Plague Tale: Requiem is available now for $59.99 on Xbox Series X|S, PC, Nintendo Switch via Cloud Gaming, and PlayStation 5. While also being included in Xbox Game Pass for Console, PC, and Cloud.

8.5
A Dark and Exhilarating Journey With a Few Missteps