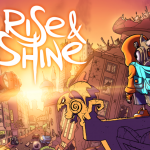 You are reading
Review: Rise and Shine, A Trip Down Gaming Memory Lane

Rise and Shine is a game I had never heard of before I played it and I’m happy that I did give it a try. Rise and Shine is one of the best indie type games that I have played this generation. It’s Developed by SuperMegaTeam and Published by Adult Swim Games so I went in expecting a few good laughs. What I got was a fun and humorous trek through a world where gaming icons are used in a different way and it works brilliantly.

The story of Rise and Shine starts off with your hero Rise receiving your weapon and partner Shine from The Legendary Warrior. You’re told that it is now up to Rise to take Shine and use his power to save the world of Gamearth from the evil Space Grunts of NexGen. The four to five-hour long story takes you to see some of the most popular characters in gaming but with a more mature and Adult Swim spin. The story here is very good especially if you’re a diehard gamer and love parody type scenes. The only gripe we had with the story was that it ends rather abruptly which is unfortunate but not a deal breaker since the rest of the story is fantastic.

Gameplay in Rise and Shine is a 2D side-scroller shooter style which works very well with the aesthetics of the game. You won’t only be shooting things though as it has a fair number of puzzles that aren’t too hard but not too easy either. As you progress you’ll unlock extra skills for Shine such as Electric Bullets or Remote Controlled Bullets. These extra abilities are called, “add-ons” in the game which we found hilarious and entertaining. The puzzles challenge you to use your add-ons in tandem and weird ways to solve them. The difficulty can spike sharply during the shooting parts which can lead to some frustration but if you like a challenge then it’ll be perfect for you.

Rise and Shines musical score is fantastic and implemented very well throughout the whole experience. Scenes that should be emotional have a very heartfelt tune that makes them that much more impactful. Then there are scenes of pure guns blazing action that has a nice rhythmic action movie beat. Even things from the reloading of Shine to the sparking coming off the electric bullets is done very well with no issues.

The visuals of Rise and Shine are cartoony and it’s very fitting for the style of game it is. The cutscenes are played out in a storybook style that feels very natural and complementary to the art style and design. The backgrounds of the areas you explore are very detailed and varied. You’ll see environments such as a bustling city with wrecked streetlights falling apart and blinking on and off or a village in a beachy jungle environment. These areas feel good in the game and not out of place which is fantastic.

As wonderful as Rise and Shine is it did have its fair share of issues during my playthrough and some were aggravating. At times, the entire background of the game would completely vanish, leaving only the foreground on-screen. Checkpoints or save points act weird as I’d come back to the game after a break and be set rather far back instead of where I stopped. The biggest issue I had, however, was where I was attempting to get into the Kingdom of Gamearth to talk to the King causing an issue where my game would either freeze entirely or dashboard out to my systems home screen. Unfortunately, I just had to keep retrying and push through until I got past the area without the bug happening.

The Final Verdict on Rise and Shine is a very solid 9 out of 10. It’s a fantastic game where the few problems that it has doesn’t detract from the overall fun and value of the game. Rise and Shine is very well put together and in our opinion stands out highly amongst the sea of indie games as one that warrants a purchase. Even though the bugs are present and the story ends abruptly these issues aren’t bad enough to drag down all the positives of Rise and Shine. If you’re a long-time gamer who enjoys old school side scroller action with parody characters than Rise and Shine is a must have and at the $14.99 price point it’s fairly priced for how much fun it is. Rise and Shine is available now on PC and Xbox One and well worth the download.