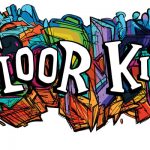 You are reading
Review: Breaking It Down With Floor Kids

The great thing about indie games is that they are willing to take risks. These games are willing to try something different and not on the path that is often taken. Floor Kids is a shining example of this developed by Merj Media. Charm, unique flair, and just new make for a better experience even if there isn’t a lot of depth.

Floor Kids is a freestyle rhythmic game based around classic breakdancing battles and moves. The game offers a roster of different break dancers with different skillset attributes that may allow them to have longer moves or better transitioning between moves creating for higher scoring combos. The setting is very fitting taking place in a concrete zoo of a city very reminiscing of typical locations one would imagine for old-school breakdance battles: Arcades, convenience store corners, dingy lofts with crowds of people.

Floor Kids does not have a strong story in the sense of any major objectives but it does provide small doses of backstory to each location. Ultimately your goal is to be the top break dancer, moving your way to the ultimate break-dancing stage. While the game does it’s best efforts to provide entertaining dialogue it definitely is far from the strength of the game. What does help is the uniqueness of the style of game it is being a rhythmic break dance game.

Being a rhythmic game Floor Kids is akin to games like Guitar Hero and Rock Band. At the same time, the game provides a unique spin in allowing the player to dance in a complete freestyle rather than a complete structure of the button pressing. Each round does feature a segment of timed rhythmic hits, often times these sections felt offbeat, then again it could be my age catching up to me. That aside the freestyle dancing provides for a lot of creativity when attempting to higher your score. As the dance proceeds the crowd will often suggest a “fire move” that when performed provides for bonus points and a more excitable crowd.

Probably the best allure of the game is the artwork in the graphical design. The faux-hand drawn setting has a unique charm that creates for an experience that only an indie game can deliver. It is easily the best part of the game as a whole. The graphics help to maintain a steady frame rate, even if it felt that the screen lagged behind the sounds of the game. 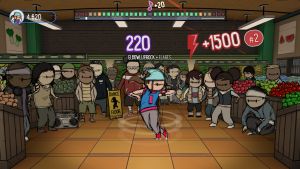 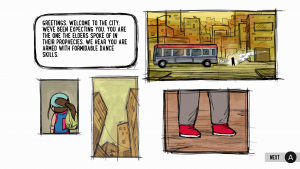 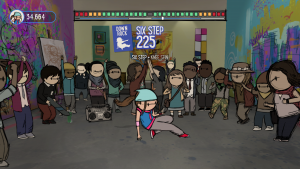 Another segment that sets Floor Kids apart from others, is the unique and original tracks utilized in the game. Each level features at least three tracks designed to encompass the feel of the breakdance scene. On top of the charming musical hip-hop beats, when you segment combos together, the crowd will often join into the beat to add flair to any given round.

The game does feature couch base co-op which works well for the game, however, I cannot help but feel that this day-in-age it disservices itself by not featuring online multiplayer. This aside it can make for a fun experience if you and a friend have nothing else to play, or would like to play a truly charming game.

All in all, Floor kids is definitely a unique game based on its premise, the original music and art style. It is an indie game that can easily be enjoyed if you like games based around rhythm and timing, or if you enjoy early hip-hop culture. It isn’t without its flaws, but those are far and few in between.