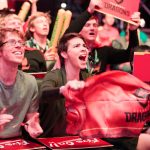 In an absolutely bonkers ending, one of the longest and painful streaks in professional sports ended this week. The cover photo was actually from last year, but it captures the fanbase that today’s first winner has had even during their disastrous first season. Conversely, teams that made strong statements last week were all over the place this week. Some teams continued to build their cases to be the cream of the crop this stage, while others fell or got sucked back down to reality.

Before diving too deep into this week, I am making some slight tweaks from last week: first, every week this article will start with the current playoff standings (left) and the rest of the field (right): 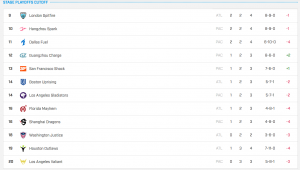 Next, instead of doing a more traditional three winners and three losers, I’m going to now do a couple of winners and losers which may or may not end up being three for each. Finally, I’m going to highlight my top play from the weekend. So without further ado…

Shanghai Dragons: I needed little-to-no thought about putting Shanghai front and center this week. You get your first match win after going 0-41 stretching back to last season, you are labeled a winner for the week. In what will be considered one for the ages solely based on the outcome, the Dragons finally got over the hump. After retaining only three of their original players, Geguri, Diya and Fearless (who has missed the first couple matches due to an undisclosed health issue), Shanghai revamped their roster to come into the season with a fresh start. It has been kind of a rocky beginning to the season, but the Dragons can hold their heads high this week as they prep for Chengdu and Dallas next week.

Vancouver Titans: After two weeks of regular season play, there are three undefeated teams remaining, from which two have played twice in either weekend, and only one of those two is an expansion team.

Vancouver has flown out of the gate and maintained its momentum, playing what analysts are likening to championship-worthy performances. Their performance this weekend, especially against the San Francisco Shock, showed how they plan to win without a true GOATS comp. On Volskaya Industries, Doomfist came out in a final push to keep San Francisco off the point, and it worked!

Even though they have only played three of its 28 matches this season (not counting stage and full playoffs), there’s no denying their hot start and their now likely appearance in the Stage One Playoffs.

D.Va Players: D.Va had a strong weekend; heck we could only look at this Sunday and still say D.Va had a fantastic weekend. Teams like the NYXL, the Paris Eternal, and many others all capitalized on D.Va’s powers. Offensively, NYXL and Vancouver timed their D.Va Self-Destructs to pair with other abilities like Lucio’s Soundwave (*boop*), Reinhardt’s Earthshatter and Zarya’s Graviton Surge. Defensively, the LA Gladiators and the Paris Eternal put on a clinic in Nepal on ideal Defense Matrix usage, eating up four of the nine Graviton Surges on that map. When teams time her ults with other moves, D.Va can be the most damaging characters in this Tank-heavy meta.

Hangzhou Spark: I refuse to believe that this is the same team from last week that won against Shanghai and the LA Valiant. Not only did the Spark lose both of their matches 3-1, the wins they did have came on Map Fours after their match loss was clinched. Houston had a near perfect opening map on Busan, beating the Spark in less than seven and a half minutes, and then London blazed through Point B on the Spark’s defense of Horizon Lunar Colony in 2:10, the fastest time so far this season. These weren’t just your standard losses for the Spark, they were absolute routs. It is far too early to worry about the final season standings for the Spark, but they need to play their best Overwatch for the rest of the Stage to get into the Stage One Playoffs.

Preseason Predictability: As noted on Sunday night’s post-games Waypoint, predictions are flying out the window. Be they gameday predictions claiming London would lose, which Soe Gschwind-Penski jokingly admitted on air, or early season predictions, last season’s second-overall seeded team the Valiant are dead last in the standings, not all predictions become as true as others. On one hand, it’s good for OWL to not be a predictable league because it keeps its fans interested, but for the teams that are failing to meet expectations, even so early on in the season, it’s a rocky experience.

Two weeks into the season, and there have been plenty of D.Va bombs that deserve high praise, some because of their team coordination (see NYXL on Hollywood and Vancouver on King’s Row). This is not one of those plays. Instead, this is arguably the play that clinched the Eternal’s win over the Gladiators:

This play is half Kruise dropping the Sound Barrier to give his team the reserve health needed to fend the Gladiators off of the point, and half-plus-more clutchness from Soon using his Projected Barrier on Kruise. Notice how little health Kruise had left right as he was about to drop his alt. In such a tiny window of opportunity, this duo came up big with a highlight reel play that let them fend off the Gladiators and eventually take the match.