You are reading
Anthem: Review In Progress 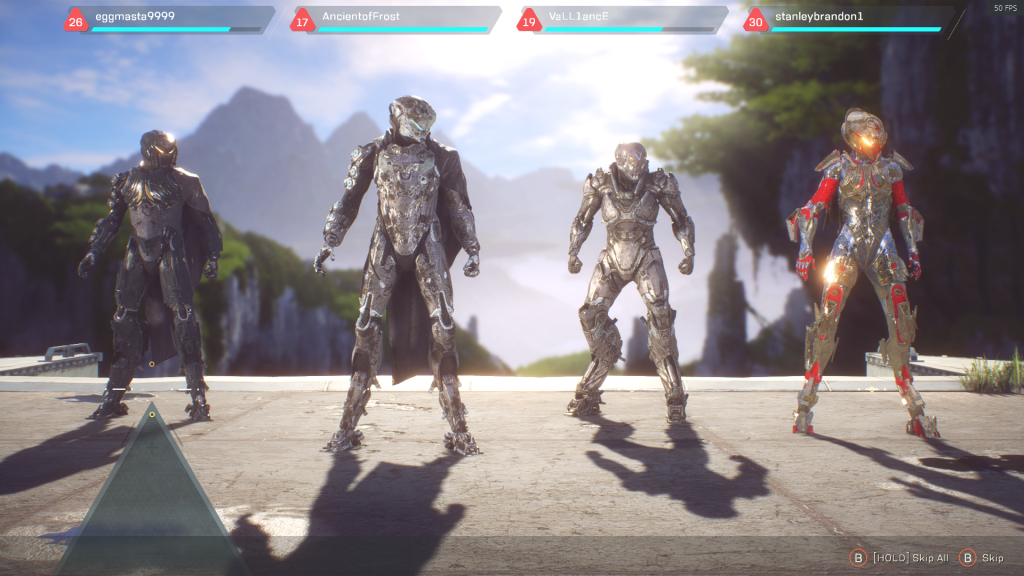 Shout out to Stanley who missed the color palette memo.

After dozens of hours spent patrolling Bastion and delving into the secret lives of the residents in Fort Tarsis, I am now ready to give my review in progress. The term ‘in progress’ is a necessity for a game of this type. After all, Anthem is a loot driven, always online, game-as-service in the vein of Destiny and The Division.  A game that is a living thing that will, and in fact has, changed and evolved in major ways over the course of its lifetime. This review represents a very particular snapshot of the game as it has existed over the first two weeks of its lifetime. With that being said, here is my review of Bioware’s latest cooperative RPG, Anthem.

Can You Hear it, The Anthem?

Anthem knows what kind of game it wants to be. It wants to be the evolution of the stellar work Bioware has been doing in the RPG genre over the last three decades. The Mass Effect series showed Bioware’s evolution as a studio by moving away from the traditional turn based combat by melding the staple power evolution of an RPG with third person shooter mechanics that were streamlined over the course of the last generation. Anthem continues this evolution to the point that calling it an RPG seems a bit of a misnomer. The combat is fast and free flowing in real time, and Anthem has traded in character progression for Javelin progression. It’s a change that absolutely works.

The Javelin exo-suit may as well be your character, since aside from brief appearances in a few cut scenes, the player character’s face is hidden behind the mask. The Javelin is, without a doubt, the game’s greatest success. The multiple classes (Colossus, Ranger, Storm, and Interceptor) provide a strong differentiation for individual play styles, while the different component parts allow for copious variation based on mission requirements. Indeed, I found that my loadout even would change depending on if I was playing with friends or randoms as a result of the cleverly designed primer and detonator power combo system. The customization takes a while to really open up, but once it does the ability to stylize your Javelin works incredibly well. There is no mistaking each of the different classes in the field, which is helpful since you will not always spawn into expeditions with your entire team at once. Your loadout consists of offensive and defensive powers, as well as static armor buffs and finally your weapons. The gunplay is entirely forgettable, with few weapons offering any kind of heft or abilities to them that make them stand out as anything but a filler between uses of the powers which are equipped as glyphs on armor sets and can be upgraded at will. Sort of.

These loadouts show that Anthem doesn’t understand a core tenant of the genre it is trying to compete in. Namely, that it is a loot game that obscures your ability to use or see your loot. The game’s hub area, Fort Tarsis is equipped with a gear management screen called the Forge. That’s right, in order to see any of the gear you have acquired on a mission or change your weapons, you have to return to Fort Tarsis. This type of gear locking is nothing less than a catastrophic failure to understand why this kind of game is played. The benefit of having multiple weapons and powers is the ability to tailor them to the mission that is being played. There is little benefit to try new gear, because of the immense downside of being stuck on a multipart mission with gear that doesn’t suit your play style or gear that is ill-suited to the mission at hand. It removes the triumphant moment of acquiring a weapon after hours spent grinding for it.  The Forge needs to be a menu option, Anthem certainly has enough of them already, why not add one more for the Javelin? Every part of Anthem comes with a caveat, even the very best reason to play the game: the flying.

A stunning sense of speed really sells the experience of flight.

The Javelin handles well in all modes of operation, but it truly shines when in flight mode. The Iron Man comparisons are appropriate and not since Crimson Skies has the experience of flying been so enjoyable. The sound design and particle effects that surround your character in flight all work together in perfect harmony that makes every second you are able to spiral through the air a joy. Which is why it is such a disappointment that Bioware has chosen to hamstring the experience. The Javelins are saddled with an overheat mechanic that triggers as soon as flight begins. After ten seconds or so of free flying, the Javelin must either land, fly through a waterfall, or come crashing out of the sky. It is a mechanic that actively works against the players ability to traverse the environment or engage in the three-dimensional combat arenas. Splitting attention between combat and heat management is just not fun, and even mods that increase your flight time never come close to alleviating this is a constant reminder that the game treats flight like a power, not as a core gameplay mechanic 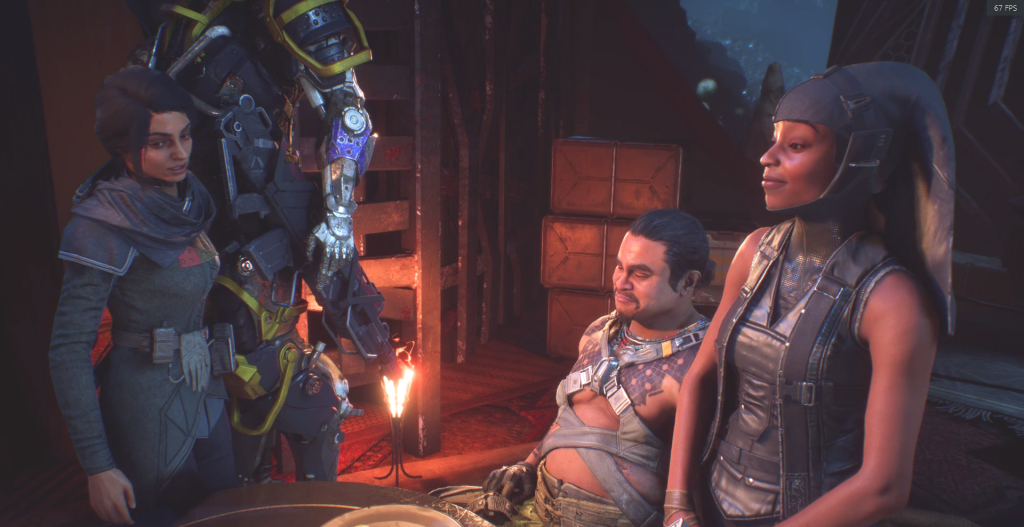 The diverse cast brought to life by incredible facial capture is a true highlight.

Much of the gameplay troubles could be forgiven if the world that Bioware had crafted was in any way compelling. Unfortunately, it follows too many of the tropes that Bioware themselves have leaned into over and over again. Mysterious power source? Check. Faceless villain who wants mysterious power source? Check. Vanished ancient civilization? Check. Check. Check. In my thirty some hours of play time, I had a single ‘woah’ moment during the main campaign, but it wasn’t due to awe or spectacle, it was due to something really weird happening to Matthias, an NPC in Fort Tarsis. Matthias is one of the two interesting characters who I didn’t feel like it was a chore to seek out and talk to each time I returned to the Fort. The rest felt like they added very little context to the world or even provided compelling stories. What they did add, was acting so ham-fisted it wouldn’t be kosher to properly address it. However, it would be negligent of me not to address Owen. In the interest of keeping this review spoiler-free, look for an entire article dedicated to him coming tomorrow. Suffice it to say that his grossly exaggerated over-acting was most memorable not for anything the character said or did, but the bizarre manner in which he did it. I suppose that is a testament, once again, to the quality of the tech behind the game that such baffling characters can come to life in such a way. It is not, much of a credit to the story overall though.

The story, while straightforward and competently told, lacks any sort of meaning or stakes as your character makes their way through the steps to reach its conclusion. Not enough meaningful time is spent with the characters to earn the moments of emotional catharsis, especially since the justification for so much of the angst is so paper-thin. Big character beats ring hollow, especially after the Freelancer’s reactions to many of the in-game events paint him in such an unsympathetic light. Character interactions between your Freelancer and the NPCs provide avenues for dialogue choices, but such choices seem to matter fairly little to the overall flow of either the conversation or the state of Fort Tarsis, which makes checking in with them between each mission grow more and more tedious to the point that I had abandoned everyone but Matthias, and Tassyn by mid-game.  The characters themselves, despite incredible facial capture and really good voice performances (especially from Faye actress Rochelle Neil) are one-note and uninteresting. Which honestly just about sums up the experience of Anthem for me.

Left: Anthem puzzle where you turn blocks to match symbols on the wall right next to them. Right: Destiny puzzle where after looking through a magic portal you see symbols that then correlate to eyes on a giant monster for no discernible reason (Source: Shack News).All Sound and Fury Signifying Nothing

Anthem is the Las Vegas of video games. It’s impressive facade hides the shallowest of pleasures. Shimmering waterfalls and glassy lakes hide luminescent algae covered biomes teeming with life and mystery. Ruins of the ancient Shaper civilization beckon to you with the promise of thrills and that next great weapon or power. The NPCs within Fort Tarsis are surrounded by lively crowds and resplendent booths. Sadly, this is all window dressing to hide an ultimately entirely vacuous experience. Those lakes and ruins? There is nothing there to explore and no loot to find. The NPCs? They are overacted characters with a singular motivation that show none of the depth and nuance that has defined Bioware games in the past. Herein lies Anthem‘s greatest sin. It is boring. A forgettable score does nothing to invoke any emotion or style. The quest design is bland. Go here, kill this. The bosses are bullet sponges that require no tactics or puzzle solving. The game makes little use of its cooperative always-online world, to the point that it makes you wonder why they even bothered. There is no requirement to work together to solve anything other than to increase damage on bosses. Doing rote tasks will always be more fun with friends, but that isn’t enough to save the game. The world holds no mystery worth solving. There is no lore worth obsessing over. There is no intrigue to the NPCs. There is just busy work. There are just check marks to be obtained on one of the dozens of menu screens. Having completed the campaign of Anthem, I’m left with a feeling of relief at the fact that I don’t have to keep up with another live game. I may check back in for big events, but I could just as happily do with Anthem what I did with Mass Effect: Andromeda. Forget about it.

5.8
Anthem has too many flaws to recommend