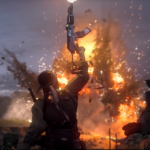 You are reading
Call of Duty: Modern Warfare Revealed With Crossplay

In the official statement, Activision confirmed the title will release on October 25th, 2019 across PC, PS4 and Xbox One consoles. Call of Duty Modern Warfare is also being reported to have cross-play between each platform. This citing also states that there will be no season pass to the game, allowing for new maps to be free to all players.

Call of Duty is available for pre-order now offering three versions of the game.