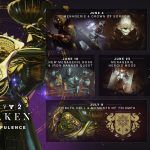 You are reading
Season of Opulence Road Map Arrives

Bungie has dropped a new update for the Season of Opulence ahead of their usual This Week at Bungie updates. The graphic below shows what’s to come, but let’s break down the big items. 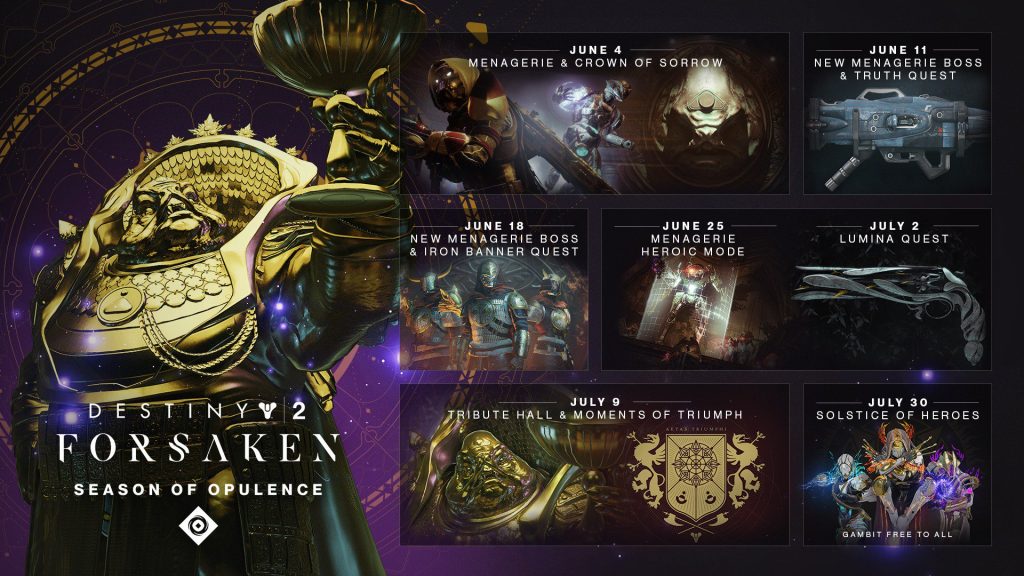 The Menagerie is the new six player matchmade activity launching on June 4th. This is a bit of a surprise considering it is also the same day the raid launches. Considering how light some of the content times have been over Season of the Drifter it was expected that this activity would launch later in the summer. in order to enter the Menagerie players will need the Chalice of Opulence, a new treasure that presumably will be obtained from Benedict 44 who will serve as this season’s primary vendor. By beating the Menagerie, players will be able to use the Chalice in order to earn specific arms and armor in a manner not dissimilar to the Forges during Black Armory. This is a welcome change from the RNG that plagued some players during Season of the Drifter. The Chalice will act like the Mote Synthesizer from the current season and can be upgraded through the next few months.

Two big surprises, considering the success of the Whisper and Outbreak Quest, is that Bungie has announced which exotic weapons will be coming during the season. On June 11, players will embark to find the exotic rocket launcher, Truth, a personal favorite of mine from Destiny 1 that had homing rockets which would detonate upon proximity to an enemy. The second is the Lumina quest, another in a long line of hand cannons, seriously Bungie, we get it. Bungie though has learned from the two most notable missions in recent Destiny history and has promised additional objectives in the worlds of Destiny 2 that will lead to Exotic gear. this has vague shades of the Sleeper Simulant hunt in D1, so let’s hope for something as interesting.

Moments of Triumph and Tribute Hall

A large theme of the Season of Opulence is the phrase, ‘Prove Your Worth’. Indeed it has been in place since the launch of Leviathan raid in vanilla Destiny 2. What exactly we are proving our worth for is a question without an answer, but it seems like Calus may finally find us worthy in the Tribute Hall. It is unknown if this is a new social space or combat arena, but by linking it to the Moments of Triumph, it seems to indicate that it will be a celebration of your accomplishments, and maybe even the community’s accomplishments in Destiny 2.

The Season of Opulence is scheduled to run through all of August, but the final event on the calendar is the Solstice of Heroes event, a recurring yearly event in Destiny that provided a pretty cool armor set for those of us that finished it before Forsaken made it obsolete. By ending the calendar there, it leaves Bungie plenty of room for surprises through the Season of Opulence as we head into year three, presumably the final year of Destiny 2. I would expect to see more information about this time frame at E3 in a couple of weeks.

Eyes up Guardian. Prove your worth.