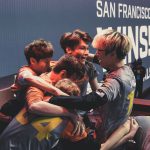 You are reading
Stage Two Playoffs Winners and Losers

Perfect stage, imperfect playoff run, but perfect champions. The San Francisco Shock won the Stage Two crown after the latest entry in the fastest-rising rivalry in the Overwatch League. In a highly skilled match up of GOATS, the Shock took down the Vancouver Titans, 4-2, thus concluding Stage Two. While we wait for the All-Star break, let’s take a look at who came up big and who blew it. Time for your winners and losers!

San Francisco Shock: This goes without saying. The undefeated stage didn’t drop a regular season map and avenged their loss in the Stage One finals. San Francisco played the long game, spending the first season to develop their players to wreak havoc the second season. Super’s insane Reinhardt plays, paired with Moth’s well-timed Lucio boops, and supported with every bubble shield Sinatraa could throw led them to victory. You could tell they had the right mindset when their response to dropping a map to Shanghai was “we knew it would eventually happen, we just have to keep going.” They were resilient and matured for victory.

Chinese Teams: This isn’t just because Shanghai won the first map against the Shock this stage. Shanghai’s fellow Chinese team, the Hangzhou Spark, won their first postseason match against the London Spitfire 3-1. Hangzhou has consistently improved themselves over this stage, only losing to Vancouver and San Francisco. Looking ahead, Hangzhou will have tough matchups with Vancouver, Dallas, and a rematch with Seoul, while Shanghai will face Philadelphia and both Los Angeles teams. Each could very likely come back to the Stage Three playoffs, ready for more.

Shock/Titans Rivalry: The Titans are only halfway through their inaugural season but have clearly established a great rivalry with the Shock. In the first two stages, they have played each other three times, two of which were Stage Finals. Each team took one Championship apiece, and none committed any mind-numbingly bad errors or sloppy plays. As far as early rivalries go for the Overwatch League, this one deserves a special place in the Overwatch annals of history.

Vancouver Titans: Their reign has come to an end. After winning their first 19 matches (including postseason), the Vancouver Titans have finally fallen. You could see the pain in Bumper’s reaction to losing the championship that this hurt. For the record, it’s not at all that they played poorly, it was a close match throughout, but San Francisco got the better of them. Maybe the Titans’ confidence fell after dropping three straight maps after being up 2-1, but the San Francisco Shock are their equals. We will have at least one more entry into this rivalry this season, but we will have to wait until the final season.

Atlantic Division Winners: Is winning this division a curse now? The London Spitfire lost against Hangzhou, 3-1, a stage after the NYXL lost to the Seoul Dynasty, 3-1. Even though this wasn’t as big of an upset given Hangzhou’s improving performances, the shock is still there. Whoever wins the division in Stage Three needs to step up and be ready for whoever they face in the first round, because this is not a good look for the division as a whole.

Tekken 8 Leads Of State of Play