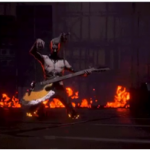 You are reading
Bleeding Edge Announced at E3

Microsoft came out swinging with their new studio acquisitions at their Xbox Press Briefing at E3. The team at Ninja  Theory, the developers behind Heavenly Sword and more recently Hellblade: Senua’s Sacrifice, showed off a stylish third person action game that looked to bring the sensibilities of Sunset Overdrive into an Overwatch Style 4v4 hero brawler/shooter. This will be a big test for the studio which hasn’t so far gone down the multiplayer pathway until now. See the full trailer at the link below.

A Technical Alpha for the game will is starting June 27th. Bleeding Edge will be playable at E3. Look for our impressions later in the week.