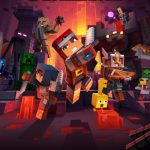 You are reading
Minecraft Dungeons, The Latest Dungeon Crawler

The world has not had enough Minecraft. Despite the Tell-Tale story driven game being removed from the storefronts, it doesn’t mean there aren’t plans for new Minecraft games. Today, Xbox announced the latest installment to the franchise. Minecraft Dungeons looks to be a spin on the dungeon looter. Imagine, if you will, Diablo or Torchlight, but in the Minecraft universe?

The trailer does indicate that Minecraft Dungeons will feature 4-player coop, including cooperative couch play. It does look to feature plenty of customization, weapons and abilities, that will help you navigate the dungeons.