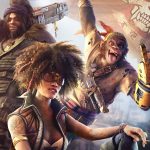 You are reading
Beyond Good and Evil 2: Where is it?

In the video game industry, we get many announcements about games.  They could range anywhere from a new IP being revealed or a sequel to a beloved series we enjoy.  This was the case when Ubisoft officially announced Beyond Good and Evil 2 at their 2017 E3 conference.  You would think that this would be a time to rejoice, but the issue is we haven’t heard hardly anything since.  This leaves us all to wonder, where is this game?

Here is what we know, or at least, think we know.  Beyond Good and Evil 2 is the second game in the series and is an action-adventure developed by Ubisoft Montpellier and published by Ubisoft.  It will follow Ubisoft’s normal video game formula.  This means it will be an open world with a third-person perspective.  It is supposed to be more traditional in the role-playing department than in the first game.

The character can be male or female and will be able to visit other planets.  This allows you the chance to learn about the unique societies on each planet. Quests will offer both character upgrades and new technology to improve your spacecraft.

Beyond Good and Evil 2 is supposed to have single-player and cooperative support.  Even as a single-player, the player can participate in a shared universe. Some events will affect all players at the same time.  The game will require an internet connection to play both single-player and multiplayer modes.

With the first game being released in 2003 and being loved by many people, rumors started swirling about a sequel as far back as 2007.  A couple of leaked trailers appeared around that time and pre-production rumors were heard back in 2008 and 2009.  Ubisoft reported that

The trailer had all been recorded within the game engine showcasing high-resolution graphics representative of seventh-generation consoles capabilities.

Many things were unclear, with conflicting statements from Ubisoft and lead designer Michel Ancel from Ubisoft Montpellier, about the game being officially in development.  In 2016, the game was put on hold so they could work on Rayman Legends which did provide some useful tools they could use for Beyond Good and Evil 2.  Ubisoft showed the first new trailer for the game during their E3 2017 conference. During this time, it was announced as a prequel to the first game.

Ancel has also confirmed the authenticity of the trailers, saying,

The 2008 and 2009 trailers were from initial work as a narrative sequel to Beyond Good & Evil, but during development, they opted to change direction and make it a prequel, and thus the work previously shown was from an effectively different game.

The game has not been announced for any platforms yet nor has it indicated exclusivity.  Ancel has said the game was being designed to run on multiple platforms though.  It is being developed with the new Voyager Engine developed by Ubisoft Montpellier.  Ancel departed Ubisoft in September 2020 but stated the project was in capable hands.

A French newspaper known as the Liberation, had been following many of Ubosfts troubles, especially with all the sexual misconduct allegations.  They learned that members of Ancel’s team found his leadership on the project to be unorganized and at times even abusive.  This would cause the game’s development to have many restarts and account for the delay since its announcement.  The team reported this to Ubisoft in 2017, but Ancel’s close relationship with Ubisoft CEO Yves Guillemot prevented any major corrections to occur until the 2020 internal evaluations that led to Ancel’s departure.

Ubisoft has also said that Beyond Good and Evil 2 will be more accessible to the many new players in op it doesn’t suffer the same “commercial failure” as the first game.  All this said many things are still uncertain with no release date, no confirmed consoles, and no news in a long time.  Ubisoft has essentially gone dark when it comes to this game.  Our next high-profile opportunity would be at the Game Awards.  Though maybe a prestige game like this justifies a special Ubisoft announcement, but only time will tell!