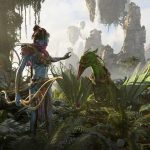 You are reading
Ubisoft Forward: Avatar Frontiers of Pandora

During today’s Ubisoft E3 event a new game was shown off. At the start of the video, it seemed like players were going to get a preview of an upcoming Star Wars game. Instead, we are getting an Avatar game called Avatar Frontiers of Pandora.

Ubisoft Forward showed off plenty of games that players will be excited to play. Avatar: Frontiers of Panroda may be one of those games. Players will take control a Na’vi in this first-person game. Don’t expect this title to be released on the last generation of consoles. Right now only the PlayStation 5, Xbox Series X/S, PC, Stadia, and Luna.

Avatar: Frontiers of Pandora™ is a first person, action-adventure game developed by Massive Entertainment. A Ubisoft studio, in collaboration with Lightstorm Entertainment and Disney. Built using the latest iteration of the Snowdrop engine, and developed exclusively for the new generation of consoles and PC, Avatar: Frontiers of Pandora brings to life the alluring world of Pandora with all of its beauty and danger in an immersive, open world experience.

In this new, standalone story, play as a Na’vi and embark on a journey across the Western Frontier, a never-before-seen part of Pandora. Explore a living and reactive world inhabited by unique creatures and new characters, and push back the formidable RDA forces that threaten it.- Ubisoft Press

Look for Avatar: Frontiers of Pandora in the year 2022. Players should see more of this game during this year’s E3. Also, did you see some of the things coming to some of the other Ubisoft games? One of the bigger highlights for me was the new villain’s mode coming to Far Cry 6.

Let Lordsofgaming.net know how you felt about today’s conference. Just leave a message in the comment section below.