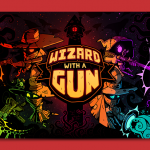 You are reading
E3 2021: Devolver Digital Stream Round Up

E3 is finally here and Devolver Digital showed off ten games during their live stream. The stream was suitably strange from the off-beat publisher, but the games looked good. So here we go.

Terra Nil is a reverse city builder about ecosystem reconstruction. Turn a barren wasteland into an ecological paradise complete with different flora and fauna. Then clean up, leaving the environment pristine. Subverting the builder genre, Terra Nil is about the restoration of a ravaged environment.

Shadow Warrior 3 starts things off with a fresh look at the incredible combat and sensational Gore Weapons!

Shadow Warrior looks like the evolution of Doom and Serious Sam.  A fast-paced first-person shooter with loads of gooey bits to be dismembered sounds just right.

Next up was stylish black and white action sidescroller Trek to Yomi. Following in the footsteps of Ghosts of Tsushima, this looked like the next samurai game to keep on your radar.

Phantom Abyss was the show’s highlight. It showcased first-person adventuring in a Legends of the Hidden Temple style. The big innovation is the incorporation of Super Meat Boy like ghosts of people who had attempted the level and failed.

Wizard With a Gun

A multiplayer survival adventure, Wizard with a Gun appears to be Devolver Digitial’s throwback to Castle Crashers and will be coming to Switch and PC next year.

Death’s Door thrusts players into a quirky and curious world where Crows are in charge of collecting the souls of the dead. Reaping souls and punching a clock might get monotonous but it’s honest work for a Crow. The job gets lively when your assigned soul is stolen and you must track down a desperate thief to a realm untouched by death – where creatures grow far past their expiry and overflow with greed and power. Death’s Door releases July 20th on Xbox Series X/S, Xbox One, and PC.

From the creator of Pony Island and The Hex comes the latest mind-melting, self-destructing love letter to video games. Inscryption is an inky black card-based odyssey that blends the deckbuilding roguelike, escape-room style puzzles, and psychological horror into a blood-laced smoothie.

Devolver Tumble Time is the future of physics-based puzzle gameplay, elegant monetization, and strategic brand integration. Choose characters from a packed roster of your favorite Devolver Digital games and rack up big points matching and clearing their impossibly adorable heads from the tumbler. Get hyped enough and unleash each character’s special ability to clear huge chunks and earn power-ups to create chaotic chain reactions. Then maybe watch some entertaining ads because nothing is ever really free.

Introducing Demon Throttle by developer Doinksoft, the creators of Gato Roboto. Coming to Nintendo Switch as a physical box set – and only a physical box set – through our friends at Special Reserve Games. Demon Throttle tells the story of a beautiful vampiress and dusty gunslinger on a quest for vengeance against a demon that stole her mystical chalices and slept with his estranged wife. Now the two unlikely companions must blast their way through four monstrous generals and their wicked domains to lift the demon’s curse and exact their revenge.