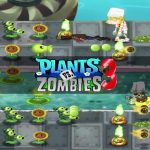 You are reading
Plants Vs Zombies 3 Finally Announced By EA

The successful game Plants Vs Zombies that took the world by surprise in 2009 has returned with a sequel. Though we have not seen an entry in the mainline franchise since 2013’s Plants vs Zombies 2, EA has found success with the Garden Warfare spin-off series. This led many to believe we might never see a third mainline installment in the franchise. They were wrong.

EA announced today through the official Plants vs Zombies page on EA’s page. “At PopCap, we’ve been working on PvZ for years and want to bring our beloved plants and zombies to current players and the next generation of players everywhere. We’re hard at work testing out a lot of fun things that we want your feedback on, and hope you will come on this journey with us!”

Think would be an amazing game for the switch? Click here for games on sale