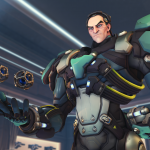 You are reading
Sigma, the Mad Dutchman, is Hero 31

Sigma is Overwatch’s Hero 31 after a leak coincided with the Role Lock announcement. Blizzard has since released teasers, a character background video, a developer update, and added him to the PTR. Console players won’t get to play with him until the next major update. Those console players must now be asking, “What does Sigma do?” Well, let’s take a look:

Writer’s Note: Unless otherwise stated, all quotes are from Sigma’s Hero page on Overwatch’s website, and there will be clips of Sigma’s abilities linked throughout the article from YouTube channel “Unit Lost – Great British Gaming”.

Sigma is the first new tank since Wrecking Ball appeared last year. This makes him the third tank added since launch and seventh overall. He is a 3-star difficulty hero with 400 total health, 100 of which are shields. Finally, in other feet related news, Sigma levitates, so opposing players need to be wary that he won’t sneak upon them. His primary weapon is his Hyperspheres. “Sigma launches two gravitic charges, which bounce off walls and implode after a short duration, damaging enemies within a sizable radius.” Think of Hanzo’s basic arrow. These abilities work similarly because they both have infinite ammo, but get few shots at a time.

Experimental Barrier: Yes, Sigma is another barrier-focused tank. “Sigma propels a floating barrier to a location of his choosing. He can dismiss the barrier at any time.” These barriers fly. They have 1500 health and can be recalled before breaking. Experimental Barriers do not seem to have a cooldown.

Kinetic Grasp: “Sigma freezes incoming projectiles in midair, converting them into shields.” Kinetic Grasp is a solid defensive and regenerative ability. It prevents incoming damage, converts them into shield-hp, and lasts for 3 seconds. An important note is the shields it makes are akin to Doomfist’s shields; they add health beyond the max 400 hp. Kinetic Grasp has a 15-second cooldown.

Accretion: “Sigma gathers a mass of debris and flings it at an enemy to knock them down.” This is Sigma’s only offensive, secondary ability in his arsenal. Sigma’s design primarily defends him and his team. His offensive abilities knock opponents away. Accretion’s cooldown is 10 seconds long.

Gravitic Flux: “Unleashing his full powers, Sigma takes flight, lifts enemies in a targeted area, and launches them into the sky before slamming them back down.” Gravitic Flux is a three-stage ult: first, Sigma starts levitating, and (also like Doomfist) aims his ult with a giant, circular symbol. Next, Sigma releases his ult and launches all opponents in the area of effect into the air, dealing damage. Finally, he holds said opponents in the air for a few seconds and slams them back on the ground. This ult can be super awesome for the user, or super awful when an ult-ing McCree gets launched for a prime window of opportunity.

Sigma brings a new, long-range, defensive angle to Overwatch. Movement-resistant heroes like Orisa and Mei could be potential counters, while Zenyatta and Zarya could struggle since they can’t resist knockback nor easily dodge attacks.