You are reading
Catherine: Full Body Review – The Wine, the Cocktail and the Sake

Catherine was an especially unique game when it released in 2011 and its rerelease eight years later as Catherine: Full Body is no different. Developed by Atlus, the team that brought you the Persona games, along with Studio Zero, Catherine: Full Body is just as fun, humorous, and weird as the original game. Now, the game has arrived with numerous additions that live up to the game’s “Full Body” name. Puzzle blocks from hell, three love interests with the same sounding name, and a horror drama with entertaining twists are what makes Catherine: Full Body a game unlike any other you will ever play.

Catherine: Full Body is puzzle-platformer that brings a story rarely told, if at all, in gaming: cheating on your significant other. Players will be controlling Vincent, an easy-going pushover that finds himself in the unfavorable mess of cheating on his longtime girlfriend Katherine with a seductive and younger woman named Catherine. At the same time, the talk of the town is the deaths of men under mysterious and random circumstances. These deaths could be linked to the “Woman’s Wrath,” a rumor about cheating men who die in real life if they die in their dreams. One night, Vincent finds himself in these death-inducing dreams fighting to stay alive through the night by climbing towers built on moving blocks. 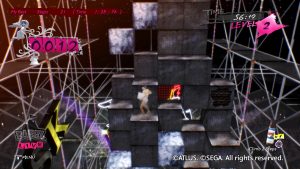 The core story of Catherine: Full Body follows similar beats to the original, but with a new wrench in the toolbox. The rerelease turns the initial game’s love triangle into a love quadrangle. The third love interest interest Qatherine, or Rin for short, has a smartly handled introduction. The original Catherine was a gripping drama that didn’t shy away from complicated adult themes. Rin’s uplifting and innocent spirit brings a different weight to the story that felt fresh. Most importantly, it didn’t feel tacked on either. Now players are able to choose either Katherine, the longtime girlfriend who wants to settle down, Catherine, the young and carefree beauty, or Rin, the soft spoken pianist.

As players unwind the mystery of these strange deaths, you’ll also be making choices that affect Vincent’s personality and ultimately the game’s story.  The game clocks in at a full 13+ hours, and more if you go for any of the game’s thirteen possible endings.

Not Your Standard Puzzle-Platforming Affair

Props to Atlus for telling a story with a taboo, non-black-and-white theme and balancing that with humor and horror. Vincent’s stress and moral dilemma feels like a parody as it does have its overdramatic-anime moments, but cheating on your lover is a very real and messy issue in the real world. Catherine is a contemporary story that touches those bases and takes the characters into moments that are honest, dark, and self-reflective.

As someone who played the original game and chose Vincent to be with Catherine, I was coming back to the game with a new perspective. I was a different person eight years ago, and this led me to make different choices for Vincent than I did the first time playing. Overall, the ending and the events leading up to it were immensely satisfying. It was the same feeling as arriving to the ending to a one-season anime.

The most fun part of Catherine: Full Body is its puzzle-platforming sections. After some binge drinking at the bar with Vincent’s friends and chatting it up with the local crowd, Vincent will enter horror-filled nightmares as a sheep-man with only two choices: climb or die. Since these towers are built on huge, movable blocks, players will pull, push, jump, and shimmy their way to the top of the tower where sanctuary awaits. It’s an easy concept to be introduced to, but gets progressively more challenging when traps and special blocks come into play. It forces the player to really think outside of the box (pun intended) despite having the option to undo the last few moves. Thankfully, the challenge incline just borders on frustrating, but tips back into fun. This is a fine line it treads and gives you a great sense of accomplishment after each level. 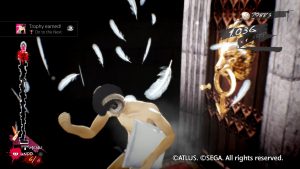 Catherine: Full Body brings some adjustments to the gameplay as well as a new game mode called Remix. In this mode, Vincent moves multiple blocks that are fixed together (so a group of blocks could be shaped like a “T”), adding a whole new experience that’s worth putting your mind to.

If you’re looking to hone your climbing skills before progressing in the story or maybe even play with a friend, Atlus delivers a few extra game modes called Babel, Colosseum, and Online Arena. All are designed with solo and cooperative online or local play functionality. As if the puzzle sections weren’t fun enough already, now teams can work with or against other players to climb the ever-changing towers. However, online connection can be janky with frequent disconnects and input delays. These cons are pretty crucial to the competitive online scene considering speed and intricate planning are crucial. Regardless, I can see myself playing the co-op levels to see if we can overcome the game’s challenges.

Speaking of victories, I can’t say enough good things about the soundtrack. Whether it’s the sensual jazz tunes or the symphonic heart-racers, Catherine delivers a very identifiable music list. Similar to its Persona cousins, Full Body offers a wide variety of arrangements and remixes. The music accomplishes everything it set outs to do, and you couldn’t ask for more.

Newer players may recognize Catherine‘s look as similar to Persona 5, but with less flair. Nothing really stands out as these characters are a reflection of real-life but in the anime art style. So while there’s nothing bad about the visuals, they’re nothing to write home about either. 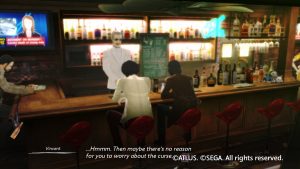 If you’re on the fence about playing Catherine: Full Body, don’t. Returning players may find the game to be a little too similar for its $60 price tag, but this entry is perfect for newcomers. Its unique blend of puzzle-platformer revels in weird horror, comedy and the conundrum of being involved in a love quadrangle. Its game play is flexible and addicting while the narrative in-between will keep your interest.   It’s fantastic that Atlus has brought back Catherine for modern consoles as it well deserves the spotlight and your time.